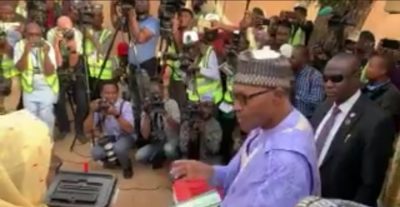 President Muhammadu Buhari with his wife, Aisha on Saturday morning voted in Daura. Aisha was the first to vote before the president at 8.06 a.m., while the president voted at 8.10 a.m.

Clad in a light blue `Babaringa’,the president was accompanied by his wife, and some security details.

Buhari, shortly after voting at Kofar Baru, Sarkin Yara “A” ward in Daura, his home town, told newsmen that he would win the election.

“So far, so good, Nigerians understand and are behaving themselves,’’ Buhari said when asked to give his assessment of the exercise, so far.