HomeNewsNinth NASS: Jibrin insists Femi Gbajabiamila will be the next speaker
News

Ninth NASS: Jibrin insists Femi Gbajabiamila will be the next speaker 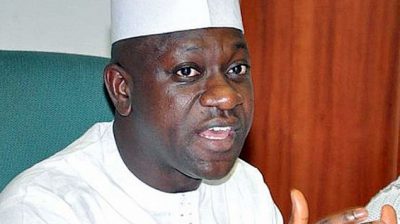 The lawmaker representing Bebeji/Kiru Federal Constituency of Kano State in the House of Representatives, Honourable Abdulmuminin Jibrin has said Femi Gbajabiamila will emerge as the next Speaker of the House.

Jibrin stated this on Monday while appearing on Channels Television programme, Politics Today, ahead of the inauguration of the ninth Assembly come June.

“I am not afraid. I have said it repeatedly and you can take this to the bank inshallah (God willing) Femi (Gbajabiamila) is going to be the Speaker. It is as good as that.”

Jibrin, who was elected under the platform of the All Progressives Congress (APC)  said he is also confident that other APC lawmakers contesting for leadership position would win.

He, however, criticised members of the party who are against APC’s zoning of National Assembly positions to geo-political zones.

While noting that when the positions of the President and Vice President were zoned to the North-West and South West respectively, party members were in support of it, he accused them of pursuing selfish interests.

“They all supported it. We all applauded. Everybody supported it, all of them one after the other. Now a few months after, they are saying we don’t want to zone. So what does that tell you? Is it all about self?” he stated.

According to Lawan, the six positions shared within the two chambers of the National Assembly will be shared among the six geopolitical zones.

His remarks follow a question posed to the lawmaker by the Channels Television’s Seun Okibaloye, regarding the possibility of what happened in 2015 repeating itself in the coming days.

The ruling party had adopted Gbajabiamila who represents Surulere I Federal Constituency of Lagos State as Speaker and Senator Ahmed Lawan as Senate President respectively.

The duo, however, lost to the incumber, Yakubu Dogara and Bukola Saraki in what appeared as a shock to the APC leadership four years ago.

But the party’s National Chairman, Adams Oshiomhole, has said the APC has learnt from its mistakes and would prevent the reoccurrence of the incident.