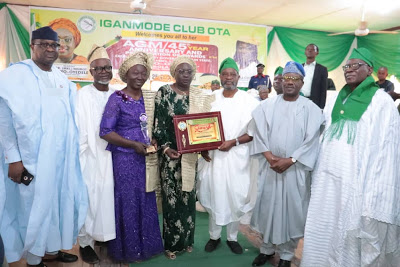 Ogun State Deputy Governor, Engr. Noimot Salako-Oyedele has urged all sons and daughters of Otta Awori to support the ‘building our future together’ agenda of Governor Dapo Abiodun led administration as it would bring more benefits to the town and the Aworis at large.

Engr. Salako-Oyedele made this known in her address after receiving an award for attaining the position of  Deputy Governor from Awori Kingdom, at the Annual General Meeting (AGM) and 45th  year anniversary of Iganmode club Otta, held at the Club house in Otta.

She said that the Governor has shown love to the Aworis by choosing his Deputy Governor from there and also appointed an Awori as the head of Service which has not happened in the history of the state.

“The Governor has also shown love to us with what he has done for us in the first six to seven months of his administration.  We have ongoing infrastructural projects in Otta which are unprecedented in the state as well as have plans for so many other things to boost the industrial sector in Otta. This can only bring benefit to the town and to the Aworis” she said

While commending the organisers of the event for a job well done, she thanked them for the honour done on her and the head of Service on her appointment as the number one civil servant in the state.

In his address, the Chairman of the occasion and Mayegun of Otta, Senator Kamal Odunsi congratulated the club on the occasion of the 45th anniversary and its giant strides, adding that the club is blessed with illustrious sons who have distinguished themselves in various fields.

He noted that there was an urgent need to do a study of unemployed youths that parade the streets, calling on the government to facilitate employment through local industries and local government operations, as this move would address the increasing number of miscreants on the streets.

Also speaking, the Chairperson of the day and Otun Iyalode of Otta, Mrs Sadat Onimole admonished the founding fathers of the club to give the younger ones the chance to grow while commending the club for surviving 45 years, she also congratulated the awardees for being exemplary in their various fields.

Earlier in his welcome address, the President of Iganmode Club, Mr.Fola Akinde pointed out that the club was founded as a socio-cultural group of people seeking and promoting good fellowship, welfare and mutual understanding amongst members within and outside Nigeria regardless of religious and political affiliation.

Highlight of the anniversary was award presentations to founding members, past presidents and trustees as well as recognition awards and honours to deserving personalities amongst who are Engr. Noimot Salako-Oyedele for her attainment as the Deputy Governor, TPL Amope  Chokor for her appointment as the Head of Service and a posthumous award to Late Prof. Lateef Salako as one-time trustee of the Club amongst several others.