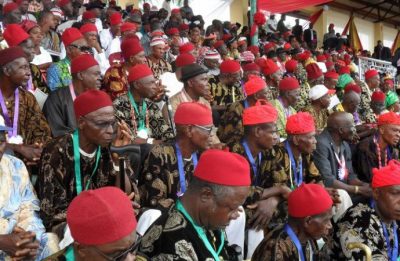 Ohanaeze Ndigbo Worldwide, the apex Igbo socio-cultural organization,  has reacted to the attack and disruption of a Labour Party meeting in Nomeh, Nkanu East Local Government Area of Enugu State.

It was gathered that the incident occurred on Saturday when hoodlums stormed the meeting venue and chased the party members away during a grassroot meeting, according to Daly Post NG.

Reacting to the incident, Ohanaeze in a statement on Monday by its National Publicity Secretary, Dr. Chiedozie Alex Ogbonnia warned that such attack should be the last recorded in the Southeast.

The frontline Igbo group lamented that at a time when individuals and groups across the country and parts of the world were embracing the Labour Party for the 2023 presidential elections, some disgruntled scoundrels were busy disrupting meetings of the party in the region.

“Ohanaeze warns that this should be the last time such incidents will be recorded in any part of Igbo land.

“All the security officers at each unit of Igbo administration are hereby requested to ensure that there will never be a repeat of such irresponsible unwarranted and shameful embarrassment to the Igbo,” he said.

The Ohanaeze Ndigbo led by Ambassador Professor George Obiozor reiterated that all political parties in the country are free to market their manifestoes and canvass for votes in the Southeastern part of the country.

The group, however, warned that nothing in the wildest imagination should “compel the so-called unknown gunmen or the vile partisans masquerading as political leaders to employ the use of thugs to disrupt political meetings in Igbo land”.

Recall that this is not the first time a Labour Party meeting is being disrupted in Enugu State. Just weeks ago, a similar incident was recorded at Awgu Local Government Area of the Coal City State.