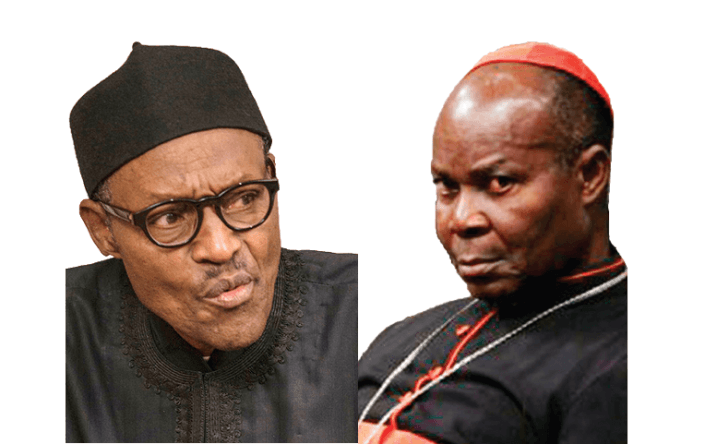 Archbishop emeritus of the Catholic Archdiocese of Lagos, Olubunmi Okogie has declared Nigerians are not protected under President Muhammadu Buhari’s watch and has insisted he should resign.

In an open letter titled ‘Dear Mr. President, Call a Spade a Spade’, Okogie said the killings recorded in the country since Buhari assumed office shows that government has failed in one of his core campaign points – security.

He said neither Nigeria nor Nigerians are protected under the watch of the Buhari led administration.

According to reports monitored on The PUNCH NG, the cleric said a factor responsible for the president’s failure is that he surrounds himself with “men and women who fail to tell you the truth about Nigeria and who shield you from seeing what is happening to the ordinary Nigerians”.

Okogie was quoted as saying: “Dear Mr. President, we must call a spade a spade. You were elected to protect the land and its people but neither is being protected under your watch.

“You, therefore, have the most important decision of your career to make. And that decision is this: Are you for Nigerians or not?”

“The number (of Nigerians) killed under your watch, Mr. President, provides more than convincing evidence that the government you lead has failed to secure our lives. You are the Commander-in-Chief of the Armed Forces.

“If more than three years into your administration, you have been unable to stop these killings, why don’t you seriously consider the option of an honourable renunciation of the presidential seat?

“One of the major factors behind the patent failure of your government is the fact that you are surrounded by men and women who fail to tell you the truth about Nigeria and who shield you from seeing what is happening to the ordinary Nigerians.

“Instead of assisting you in the governance of this country, they insult those whose dissenting opinions you need if you are to succeed.”
Okogie further called on Buhari to take drastic measures in ensuring that those found culpable in relation to the killings are made to face justice.

“That is why the point must also be made that those who contravene the laws of Nigeria be brought to book, irrespective of their political, regional, ethnic or religious affiliation. But the sad reality is: under your watch, that is not what is happening.”

“Dear President Buhari, I am compelled to write to you again because, since the bloodshed of the first day of this year, there has been more bloodshed in Zamfara State and in the Middle Belt.

“You described what is going on as a clash between herdsmen and farmers. If the identities of these criminals are not hidden, why has the Nigerian intelligence community, under your watch, failed to prevent them from shedding blood?”

This is not the first time Okogie is calling for the president’s renunciation of his position.

In January, the archbishop, while reacting to hints that Buhari would contest the 2019 elections, said ‘’It’s an insult to Nigerians for Buhari talking about his re-election.”

Okogie said the president should respect himself and retire quietly, he added that Buhari must be a joker thinking about second term.

“What has he done in the years he had been in the saddle? He has performed woefully; that’s the verdict of Nigerians,” Okogie had said.