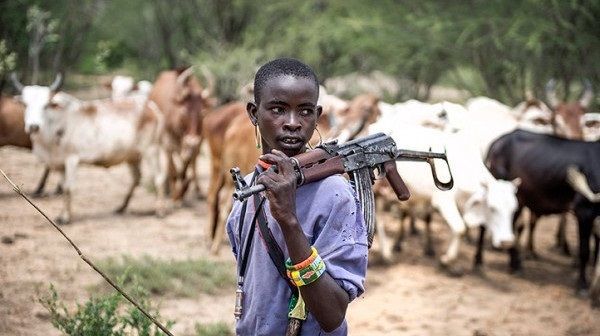 A suspected Fulani herdsman has been arrested with an AK 47 assault rifle in Enugu.

The incident happened at Ugbawka village in Nkanu East Local Government Area of the state, on Thursday.

Our correspondent learnt that the herdsman was initially apprehended by some youths of the village, who were suspicious of his presence in the agrarian community.

It was gathered that upon interrogation by the youths, said to be members of a vigilante outfit, the unnamed herdsman could not explain his mission and the reason he was bearing the deadly weapon in the community.

Sources in the village revealed that the gun was loaded with live cartridges.

The armed cattle rearer was subsequently handed over to the police.

Findings by Southern City News indicate that the herdsman was still in custody on Friday.

It was further gathered that the development led to tension in the community, as anxious youths and other members of the village mobilised themselves in anticipation of retaliatory attacks by Fulani herdsmen, who operate in large numbers in the area.

However, a team from the police anti-terrorism unit, as well as some men of the 82 Division of the Nigerian Army, Enugu, had to be deployed to the village in order to avert any breakdown of law and order on Friday.

“As I speak with you, I am on my way back to Enugu; I am in the entourage of the Commissioner of Police, we went to Ugbawka to assess the situation and there is no cause for alarm. There is calm,” the police spokesman said when contacted on Friday.

Natives of Ugbawka village, who are mostly rice farmers, have been having series of confrontations with herdsmen operating within their community.

The villagers have accused the cattle rearers of destroying their rice farms.

Like Ugbawka, other agrarian communities in Enugu State have been experiencing anxious moments as a result of the activities of Fulani herdsmen.

In 2016, several persons were killed when suspected Fulani herdsmen invaded Ukpabi Nimbo, a community in the Uzo-Uwani area of Enugu.

The Ukpabi Nimbo massacre, as the attack came to be known, led to the establishment of vigilante outfits in all the villages in the state, a development, which has reduced the frequency and scale of herdsmen attacks in Enugu State.