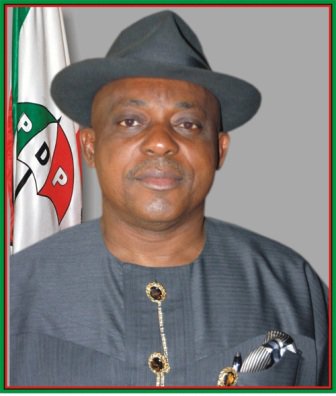 Nigeria’s major opposition party, the Peoples Democratic Party (PDP) has charged President Muhammadu Buhari to clear the air on allegations of corruption that have pervaded the recovery of the N1.03 trillion fine imposed on MTN Nigeria, The Guardian NG reports.

The party said Buhari and his administration have questions to answer on how the sum was allegedly reduced to N330 billion, especially in the face of allegations that certain interests in the Presidential Villa, said to be very close to the President, “took a bribe of N500 million” before the reduction.

Following the Federal Executive Council (FEC) meeting on Wednesday, the Minister of Justice and Attorney General of the Federation (AGF), Abubakar Malami, had disclosed that the Federal Government approved the payment of N500 million to a team of external lawyers including seven Senior Advocates of Nigeria, who facilitated the recovery of the fine slammed on the telecommunications giant.

Malami said: “The Federal Government engaged the services of lawyers to put up defence on its behalf.

As a result, the parties eventually settled the case amicably. And arising from that settlement, the lawyers were entitled to their fees.

“The Federal Government has now sanctioned the payment of N500 million for the N330 billion agreed upon for the alleged breaches in their (MTN’s) operations.

This amount is less than one per cent of the fee, instead of the internationally recognised fee, which is pegged at five per cent.”

But the PDP noted: “It is, to say the least, disgusting that while this allegation of bribery at the Villa has remained uncleared by the Presidency, President Buhari, the same African Union (AU) Anti-Corruption Champion, on Wednesday, approved the frittering of another N500 million from the same fund, under controversial claims of professional fees to unnamed persons for unspecified services.”

The party’s National Publicity Secretary, Kola Ologbondiyan, in a statement, yesterday, said: “The nation had long expected Mr. President to clear the air on the sordid allegation of bribery in the Presidential Villa.

Rather than progressing in that direction, President Buhari has continued to act as if the demand by Nigerians to know the truth about the alleged bribery in the Villa over the payment of the MTN fine, does not matter.”

The PDP challenged Buhari to disclose the basis for the N500million professional fee, asking: “What due process instruments did he rely upon? Who are these lawyers?

Who contracted them? Under what terms and what services did they render that…beyond the Attorney General of the Federation and the team of lawyers at the Nigeria Communications Commission (NCC) and the Ministry of Justice?”

It added: “Now that it has become clear that the Buhari Presidency is entangled in sleazes over the MTN fine saga, the PDP charges President Buhari to end his concealment of corruption in the villa and show his sincerity by allowing an open inquest into his administration’s dealings on the MTN fine payment.”

Reacting to the accusations, the spokesman for the All Progressives Congress (APC), Mr. Bolaji Abdullahi, however, said the Presidency would not be distracted by spurious allegations, coming after Buhari delivered a crucial blow to the PDP, with last week’s declaration of June 12 as Democracy Day.

He insisted the government’s justice machinery, evident in the sentencing of two former governors to jail over corruption charges, would not be slowed down.
“
The two recent developments have thrown PDP off balance. And it is looking for every means to cause a distraction.

This must have prompted the party to come up with this unfounded allegations,” he said, urging the party to prove the charges or otherwise keep silent.

The Presidency, yesterday, kept sealed lips over the allegations. The Special Adviser on Media and Publicity, Femi Adesina, simply asked The Guardian to “Please, direct the questions to the AGF.”

This came as former aide to ex-president Goodluck Jonathan, Reno Omokri, urged Buhari to take action against persons accused of corruption, even as he described the sentencing of former governors Jolly Nyame and Joshua Dariye as PDP’s anti-corruption feats.

The duo were detained,, charged and prosecuted by the Jonathan and Yar’Adua governments, and not by the APC administration, he said, stressing that the Buhari government is “trying to reap where it did not sow.”

Omokri said that while Jonathan was noted for firing erring PDP ministers and handing them over for investigation by the EFCC, the Buhari administration failed to take action against those recently accused of corruption.

“The Buhari administration is so desperate for achievements. And because it has none, it continues attempting to steal the achievements of others, like the convictions of Dariye and Nyame, which was initiated by the PDP, which charged them to court in 2007; and the Abuja-Kaduna rail, which was designed, built and completed by PDP administrations,” he said.

Omokri said: “My attention has been drawn to a statement by the Economic and Financial Crimes Commission (EFCC), claiming that the recent convictions of former governors Jolly Nyame and Joshua Dariye has vindicated them from the oft-repeated accusation that the EFCC, under Buhari, is lukewarm at prosecuting chieftains of the ruling APC for corruption.

“Nothing could be further from the truth, and the statement only serves to show the dishonesty and lack of integrity of the current leadership of the EFCC.

“The fact is that Joshua Dariye and Jolly Nyame, the two former PDP members recently imprisoned for fraud, were charged and prosecuted by the PDP administrations of Umaru Musa Yar’adua and Goodluck Jonathan, and not by the APC-led government of Muhammadu Buhari.

“Joshua Dariye, for instance, was charged to court on July 13, 2007 by the EFCC under the leadership of Malam Nuhu Ribadu, who was then serving under a PDP-led administration headed by President Umaru Musa Yar’adua.

His plea was taken and his trial began after all applications filed by the accused to stall the trial were dismissed by the Supreme Court.

Trial fully commenced and was ongoing at the FCT High Court by 2008.”