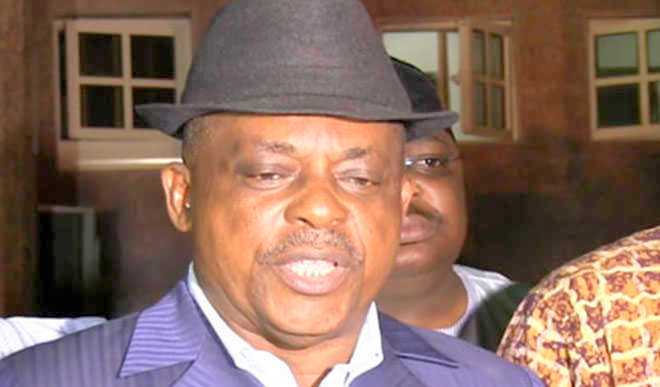 Prince Uche Secondus, the National Chairman of the Peoples Democratic Party (PDP) has reacted to the invasion of the National Assembly by operatives of the Department of State Security (DSS), thus preventing staff and lawmakers from gaining access to the complex.

The PDP leader in his reaction urged the United Kingdom should expel President Muhammadu Buhari for “hiding in that country to plan the undermining of democracy in the country.”

Secondus said that Britain should not allow its environment to be turned into a haven for anti-democracy conspirators.

He said in a statement from signed and made available by his media aide, Ike Abonyi that the President left the country to UK for 10 days medical leave to enable the nefarious activities they lined out against democracy be executed in his absence.

He said that the final plan for the invasion of National Assembly was concretized when the minority leader, Senator Godswill Akpabio visited the President in London at the weekend.

Secondus said, “the siege in National Assembly leaves no one doubt that President Muhammadu Buhari and his ruling APC are out to destroy this hard earned democracy all because they can no longer fit into it.

The PDP chieftain also salutes the courage of the Vice President in sacking the Director General of the DSS, Lawan Daura to show that Nigeria cannot be hijacked and ruled by cabals.

“The National Chairman said that democrats all over the World do not need any further evidence to show that President Buhari and APC have suspended democracy and are now running a draconian administration.

“When an executive arm in a democratic setting muscle up other arms of government, the correct name for such administration is autocracy and dictatorship.

“Nigerians and the international community have continuously watched this administration, harass and intimidate the legislature and Judiciary as well as others in opposition in their bid to create a dictatorial regime.

“All over the World, the parliament is the bastion of democracy and rule of law anybody not willing to alien himself to them is trying to create anarchy in the land.”

Prince Secondus said that “the actions of the security agencies this morning clearly shows a drowning man who is totally alienated from happenings around his environment and suddenly wants to survive when the ship is already wrecked.”

The National Chairman then called on President Buhari to resign and pave way for the sustenance of democracy “since it is now obvious that he has lost legitimacy to continue as an elected President.”

Prince Secondus said that “no amount of intimidation and harassment will deter lovers of democracy from pushing for the extinction of this wicked regime.”

He noted that “Nigerians passed through this route before in their struggle to restore democracy in this country and the will of the people and that of the almighty prevailed and this time cannot be an exception.

“We are aware that when a regime exhausts idea of what to do and loses the legitimacy that brought it to power, it could be dangerous like a bull in China shop but truth is that Nigeria will survive this regime and laugh last.”