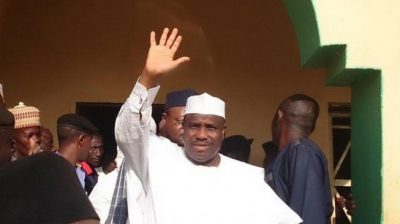 The Supreme Court has affirmed that Governor Aminu Tambuwal was duly elected in the governorship election conducted on March 9, 2019.

It, therefore, struck out the appeal brought by Ahmed Aliyu of the ruling All Progressives Congress, APC, challenging the said election.

Delivering the judgment, Justice Abba Aji affirmed that the appeal lacks merit as the appellant could not prove the grounds of his appeal which, inter alia, involved over-voting and non-compliance with the electoral law.

In the same vein, the apex court also on Monday affirmed Governor Abdullahi Ganduje of Kano State as duly elected in the March 23 governorship election in the state.

In a unanimous judgement read by Justice Sylvester Ngwuta on Monday, the court held that the challenger, Abba Yusuf of the Peoples Democratic Party (PDP), did not show that the Court of Appeal and the Election Tribunal were wrong in their earlier rulings.

The seven-member panel said the appeal had no merit and dismissed it.

The apex court also struck out a cross-appeal filed by Ganduje, the candidate of the All Progressives Congress, APC.

The Kaduna Division of the Court of Appeal had on November 22, 2019, upheld Ganduje’s election, affirming an earlier decision by the tribunal led by Justice Halima Shamaki.

The Court of Appeal five-member panel, led by Justice Tijjani Abubakar, in a unanimous judgment, dismissed the entire petition of the PDP’s candidate and its party for lacking in merit.

The governor had defeated his opponent after a rescheduled election by the Independent National Electoral Commission (INEC).