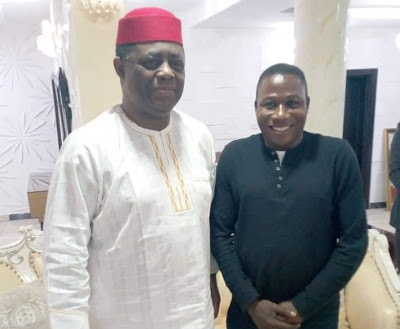 Nigerian former Minister of Aviation, Chief Femi Fani Kayode, has said the breakaway of the South-West Region from Nigeria to become Oduduwa Republic may not be actualized without popular Yoruba rights activist, Sunday Adeyemo popularly known as Sunday Igboho.

Fani-Kayode who stated this in series of Tweet post on Monday morning said Igboho “is by far the present most popular and powerful man in South Western Nigeria today,” adding that, “He has inspired millions and restored the honor and self-respect of the Yoruba nation.”

According to him, Igboho does not believe in the Yoruba nation being part of Nigeria but wants an independent nation of Oduduwa Republic to be carved out of the West African nation – “and that is his right. We may not all agree with those views but we will defend his right to hold them” Fani-Kayode.

I will say this once for all to hear.

Chief Sunday Adeyemo (AKA Sunday Igboho) is by far the most popular and powerful man in South Western Nigeria today. He has inspired millions and restored the honor and self-respect of the Yoruba nation.

He has also proved to the doubting Thomas’ that the sons of Oduduwa are not cowards. His views are simple and clear and he is entitled to them. He does not believe in Nigeria but in Oduduwa Republic and that is his right. We may not all agree with those views but we will defend his right to hold them.

We may not all accept his methods but, as long as he operates within the law, we have no right to criminalise, demonise, undermine or stop him. He is not a terrorist, a criminal or a murderer. He is a law-abiding Nigerian citizen and businessman who pays his taxes, defends his people and stands up against dangerous murderers and killers that have come from outside our territory to kill our people.

He is not an activist but a freedom fighter, a hero and a liberator of the oppressed who opposes tyranny and the mass murder, ethnic cleansing and enslavement of his people.

Unfortunately, there appears to be a well-orchestrated plan and dastardly plot by some identifiable forces and individuals to eliminate him.

The attempt to abduct him like a common criminal in the middle of the road whilst he was on his way to a meeting with our revered father Papa Ayo Adebanjo a few days ago by security forces is just one pointer, amongst others, to this. They want to silence him at all costs because of what he has been doing, what he believes in and what he stands for.

This must not be allowed to happen. It must not see the light of day. Those behind it must perish the thought because if it does there will be dire, far-reaching and uncontrollable consequences for our entire nation.

If it does there will be a massive and brutal retaliation and Nigeria will be broken.

If it does the quest for Oduduwa Republic will no longer be a peaceful, lawful and constitutional one but it will become a violent and brutal freedom struggle which will lead to an armed struggle and civil war in which millions will die.

If he is killed those behind him will stop talking and writing and instead they will start targetting the enemy and fighting. No-one will be safe and no-one will escape it. This is not what I wish for but it is what I see and I pray it never comes to pass.

Nevertheless, I see and sense it. I perceive it strongly and it scares and worries me. Igboho is unlike any other hero in Yoruba history. He is special and he is the beloved of the Lord. What he is doing is what God sent him into the world to do. He was carefully crafted and prepared for it.

Nothing must happen to this great, noble and courageous son of Oduduwa who has captured the hearts and minds of over 60 million Yoruba people from all over the world. He must not be killed. Let me end with the following.

Chief Sunday Adeyemo reminds me of Sir William Wallace (1230-1305) the great Scottish leader and warrior who led an armed rebellion against English rule and who inspired the successful quest for Scottish independence.

Even though he fought and defeated the mighty English army successfully on several occasions and in many battles Wallace was eventually betrayed by the ruling elite of same Scotland that he sought to liberate.

They gave him over to their English oppressors and overlords in return for land and title yet eventually his cause still prevailed even though it was after his execution & even though he did not live to see it.

Without William Wallace (Braveheart) there would never have been an independent Scottish nation with its own independent Kings and Queens.

Without him, Scotland would have forever remained a vassal state of England Without the efforts and courage of men like Sunday Igboho, Olayomi Koiki and a few others there will never be an Oduduwa Republic.