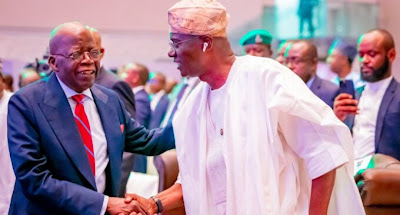 The Lagos governor said Tinubu is not a stranger to the needs, concerns and interests of the private sector.

He spoke on Tuesday during an interactive session between Tinubu and industrialists, business executives, entrepreneurs and foreign investors in Lagos.

Sanwo-Olu said Tinubu, as a visionary political economist, understands the pulse of investors.

“Asiwaju Tinubu is a man that has been able to combine political acumen with the understanding of the economy and economics of every jurisdiction,” he said.

“As Governor of Lagos, Tinubu pioneered several firsts, which still stand till today. During Asiwaju’s tenure, he initiated the idea of the Economic Summit as a catalyst for economic development.

“He started in Lagos with the Ehingbeti Summit in 2001. That summit has continued to lead the successive administrations after him into various applaudable economic agendas.

“Under Tinubu’s leadership, Lagos became the first sub-national entity to bring about the Independent Power Project (IPP) and first state to initiate the idea of establishing a seaport.

“Yesterday (Monday), that vision came to fruition as we witnessed the completion of Lekki Deep Seaport. This speaks to the sheer doggedness and audacity of this man of vision.

“Eko Atlantic City is today the biggest real estate developed in this part of Africa through reclamation of the ocean. All thanks to the vision of Asiwaju to turn problems to opportunities.

“Today, Tinubu is here as a politician and leader of our party. On the other side, you all see a man that is compassionate, intelligent, business-driven and has the acumen to solve the challenges the private sector experiences on a daily basis.

“I present to you, the man that has what it takes to lead this country forward to a prosperous future with renewed hope.”

The APC presidential candidate also presented his economic action plan to the business leaders at the interactive session.