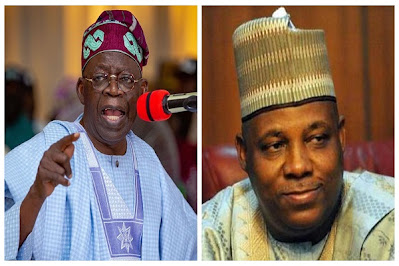 From the cacophony of these voices, it is ostensibly clearer now that the calculation and the permutation they have at hand or which they had anchored their game tactics and strategies may have been thrown overboard with the conglomerate of Tinubu and Shettima.

The amalgamation of Asiwaju Bola Ahmed Tinubu and Senator Kashim Shettima as the ticket holders of the All Progressive Congress (APC) for the 2023 presidential contest has invariably turned to be a cocktail of confusion for the standard bearer’s opponents within and outside the bloc.

It was the 19th century French Emperor Napoleon Bonaparte that stated that ‘never interrupt your enemy when he is making mistake’. But, instead of advancing their cause and programs, the opposing political parties and their supporters have non purposefully interposed their own line of thoughts, unbelievably paused and technically put their mission on hold. Were they unsettled with the combo?

Instead of heaving a sign of relieve and rejoice over what they termed as gravious political miscalculation on the part of their major opponent, and ultimately capitalized on the claimed error, they have been kicking and wailing uncontrollably; deeply engulfed in the web of the controversy that emanated from the Tinubu’s fusion with the former Borno governor.

And, through their actions and inactions, Tinubu’s candidacy is obliviously been projected, thinking he’s been de-marketed. Do they truly have any vision or mission?

In the words of Hans F Senaholz, ‘many of us are not aware that politics is an ugly struggle that determines who get what, when and how. It is a game which benefits are bestowed according to political skill and connection’

It is on this pedestal, that the great Winston Churchill described politics as ‘earnest business’. In participatory democracy, it is a known fact that the best tactician and the smartest strategist with the required numerical number wins the game. As earnest business, zealousness of purpose comes into play. And, decisions taken can be weighty and diligently decisive.

Many have argued (and still arguing) that the same faith ticket will not fly;  that Nigeria is now more divided along religion and ethnic lines than ever before. There’s no doubt about this notion. But, presidential politics has become a game of inches. For any positive contender to effect the desired and the needed change in the affairs of the country, he or she must have first secured the coveted prize.

The same faith ticket imbroglio has equally confounded the CAN leadership of Rev. Dr Samson Ayokunle. Speaking through his Media Assistant, Pastor Adebayo Oladeji, he stated that such manner of ticket was a slap on Christians. ‘If you say that we are not competent to be number two, then our votes are not competent for you’. I immediately captured the hands of Esau and the voice of Jacob. The Media Assistant and his principal are allegedly unapologetic PDP sympathizers. If this statement had emanated from the Pentecostal Entrepreneur that are clearly partisan and now totally filled with confusion, it would have been meaningful. However, is CAN now part of the Spiritual Wing of the PDP?

From the cacophony of these voices, it is ostensibly clearer now that the calculation and the permutation they have at hand or which they had anchored their game tactics and strategies may have been thrown overboard with the conglomerate of Tinubu and Shettima.

In the presidential race, where we have other 14 contenders and Christians such as Christopher Imumolen of Accord Party (AC), Dumebi Kachikwu of African Democratic Congress (ADC), Okudili Anyadike of National Rescue Mission (NRM), Peter Umeadi of All Progressive Grand Alliance (APGA) amongst others, some of these church owners and few leaders are still puzzled and somehow perplexed.

Even, when they know that democracy is about choices and that good leadership has got nothing to do with religion, these political enthusiasts and religious players are still lost on the supposed blunder committed by the former Lagos governor.

If Tinubu has indeed committed political harakiri with his choice of Senator Kashim Shettima as running mate, do we need to ‘die’ with him before we vote for our choice?

And, I begin to interrogate the words of Laurel K Hamilton that ‘the truth may not set you free, but if used carefully, it can confuse the hell out of your enemies’. It is Tinubu that is having the headache, why the hullabaloo about taking panadol on his behalf?

There is no doubt about it, the combination of Asiwaju Bola Tinubu and Senator Kashim Shettima is truly unabashedly a cocktail of confusion!

Prior to the primary election, he was severely punched on all sides – to be too old to be the President of Nigeria. They failed to take into recognition the words of the former U.K Prime Minister, Sir John Major who recorded in his thesis that ‘the first requirement of politics is not stamina, but patience and intellect’

Among the presidential contestants, who has truly covered the miles – to working the day and night in his quest to achieving success? While others calmly seated in the comfort of their zones, dishing out orders, the Jagaban is still busy crisscrossing the length and breadth of Nigeria and abroad networking and reestablishing valuable contacts. Is it not a known fact that success occurs only when opportunity meets preparation?

Also, in the course of the primary contest, the propagation of the anointing oil safely kept in PMB’s wardrobe in Aso Rock Villa, but which later went missing, was so deafening that the ex Lagos governor confessed that he almost lost his balance and he had to result to prayers.

And, when the Jagaban of Borgu thereafter clinched the APC ticket, another ‘ziggy-line’ that came into fore was that he has no educational certificates. The false flying card was later punctured.

Now, the Muslim-Muslim combo is the new weapon of assault. To be candid, I can now truly comprehend the thoughts of Toni Sovenson that ‘true strength isn’t being able to knock your enemies down, its being able to hold yourself upright against their blows’

Despite the series of attacks launched against him by his opponents and foes alike, the man who was thumbed up as the Asiwaju of Nigeria, by the richest man in Africa, is rock steadily marching on the Kings highway – with all eyes on the presidential seat.

In all sense of it, ‘Politics is a long run game, and the tortoise will usually beat the hare’