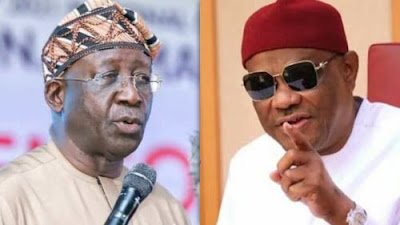 Gov Wike who spoke on a live TV interview in Port Harcourt on Friday accused the Ayu of collecting N1 billion from party members in Lagos.

He said: “Ayu is corrupt. Quote me. I am a lawyer and I am the governor of Rivers State. Ayu collected N1 billion in Lagos.

READ ALSO Raging thunder! Wike vows to stay and fight in PDP, says “I won’t leave like they did in 2014”

“He told one of the PDP presidential aspirants before the primary that the governors were not ready to fund the party.

“I know how the money was arranged and those involved in packaging the money. He collected the N1 billion. Let him come out to tell Nigerians it is not true and I will reveal more”.