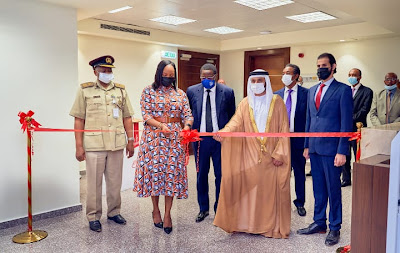 The United Arab Emirates has inaugurated a visa application and document attestation center at the office of the UAE Consulate General in Lagos.

This was disclosed in statement by the office of the UAE Consulate, stating that the event took place on Tuesday, 11 January, 2022.

A report by the Punch newspaper said the inauguration was led by the Consul General Dr. Abdulla Al Mandoos and was attended by the Special Adviser to the Lagos State Government on Sustainable Development Goals and Investment, Solape Hammond; Comptroller General of Immigration for Lagos State, Ahmed Aliyu; Country Manager of Emirates Airlines, Paulos Legesse; Vice President of the Lagos Chamber of Commerce and Industry, Gbenga Ismail; Head of UAE Visa Centre, Abdulla Alqahtani.

Leading the visitors on a tour of the center, Mandoos reaffirmed that the UAE had worked towards fostering its bilateral relations with Nigeria.

He said, “The vision to establish a Visa and Attestation office in the Centre of Excellence has been in the works for a while now. Lagos being the economic capital of Nigeria with over 20 million in population, the center aims to put to ease the bilateral business processes between both countries.

“The best equipment has been installed to ensure the process remains fast and convenient with a target of six minutes to complete the entire process from the walk-in.

“With this new development, we anticipate that the people of Lagos and neighbouring states no longer feel compelled to travel to Abuja to process visas and attest their documents as they can now achieve all that in Lagos State.”