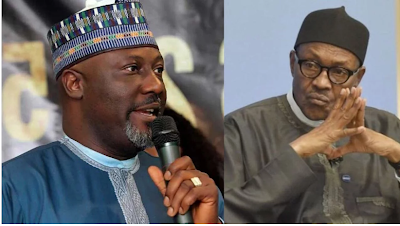 A former Kogi West Senator, Dino Melaye, in reaction to President Muhammadu Buhari’s planned medical trip to the United Kingdom for medical holiday, has called on the President to delegate duties of his office to Vice President Yemi Osinbajo

Melaye said Buhari should hand over to the Vice President before embarking on his widely publicized medical trip to the UK.

The former lawmaker, in a tweet, said the President should temporary relinquish power to Osinbajo by writing to the National Assembly.

“The president should transfer power to the Vice President through a letter to the National Assembly before leaving the country in-line with constitutional provision. SDM,” Melaye wrote in a tweet post.

Also, a former Kaduna Central Senator, Shehu Sani urged the president to have a good rest.

In a tweet, Shehu wrote: “I wish the President a safe trip to the UK and I pray for his safe return home. For your complete rest, off your data, entertain no visitors and avoid the diaspovites.”

The presidency had on Monday night announced that President Buhari was billed to depart Nigeria on Tuesday (today) for the UK for a medical check-up.

Buhari had embarked on some medical trips abroad since he assumed office as president of the country.

NEWS: Nigeria is under a failed weak system – Alaafin