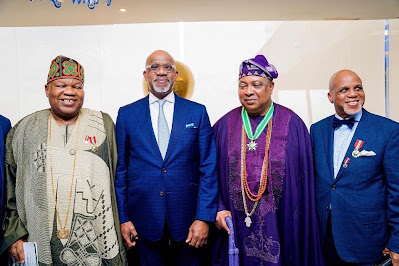 The Ogun State governor, Dapo Abiodun has charged the 20 national honours awardees from the state to help attract more investments to the state.

In a statement by Kunle Somorin, the Governor’s Chief Press Secretary, Gov. Abiodun said the awardees have enormous clout to attract more private participation into the industrial development programmes of his administration.

Abiodun who made this known during a reception organized for the national awardees, said that their respective awards have proven that the state is a haven for great men and women who are capable of great innovations and achievements in all fields of human endeavours.

The governor further noted that the conferment of the national honours awards on the recipients was a further call on them to give more in terms of service than they have ever done to the people and the state, adding that he expected the awardees to be more involved in the collective vision so as to give the state a focused and qualitative governance.

” Also, as captains of industries, l enjoin you to help bring more investments to our State. Your influence and connections can attract private participation in our industrial development programmes. There are different avenues where investors can participate in our ISEYA core Pillars of our development Agenda.

“More than these awards, this honour is a call on you to give more in terms of service than you have ever done to our people, and our dear State, in particular, and humanity, in general. Greatness is a continuous thing: it has no beginning, neither does it end.

“As sons and daughters of Ogun State, we expect you to be more involved in our collective vision To give Ogun State focused and qualitative governance and to create the enabling environment for a public-private sector partnership, which is fundamental to the creation of an enduring economic development and individual prosperity of the people of Ogun,” he said.

The state helmsman also noted that  his administration had formulated new investment-friendly policies directed at creating the enabling environment for investment to thrive, adding that “the innovation covers the land administration; judicial system; strengthening of security network; creation of new government agencies and so on. All these have made our state more investment friendly”.

He, however, stated that his administration would continue to formulate policies and execute programmes that will continue to take Ogun State to the desired destination.

Also speaking, the Vice President, Professor Yemi Osinbajo who was also at the venue of the reception, congratulated the awardees for the awards bestowed on them by President Buhari, charging them to always remain good ambassadors of Ogun State.

Responding on behalf of the awardees, the Akarigbo of Remoland, Oba Babatunde Ajayi who is also the  Chairman, Ogun State Council of Obas, appreciated President Muhammadu Buhari for the honours, saying that they would continue to add more value to the country.