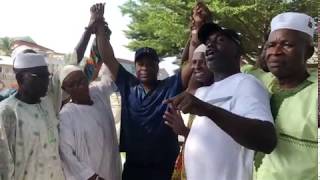 Heads of Akiogun Ruling House, community leaders (baales) of some settlements in Iruland including Baale of Ilabare, Chief Ahmed Basorun, Baales of Oko Kuku, Ipewun, Osolu, Alakoto, Mosafejo, Falomo, Abule Ode amongst others unanimously agreed that Prince Adesegun Oniru should be installed as the next Oniru of Iruland.

Others including women, youths and several residents of the area, who were present at the venue of the declaration lent their voices to the choice of Prince Adesegun Oniru, son of the late Oniru of Iruland, Oba Abiodun Oniru, who died in September, 2019, as the next Oba of Iruland.

This declaration was however, preceded by a traditional rite, where kolanuts were thrown on the floor for a sign of approval or rejection.

The traditional rite was declared positive in favour of Prince Adesegun Oniru as the kolanuts turned to the positive side, an indication that his tenure as Oba would be peaceful and favourable to the town.

Prince Adesegun Oniru, an engineer, and administrator was born on March 11, 1965.

Prince Oniru was the Managing Director of Lagos State Waterfront and Tourism Development Corporation between 2003 and 2005, and Special Adviser on Works and Infrastructure to Lagos State Governor in 2005.

It will be recalled that there had been wars amongst the various ruling houses in Iruland shortly after the demise of Oba Abiodun Oniru.

Just last week, a ruling house in the area, Abisogun Family described a report in a section of the media that the former Chief Security Officer (CSO) to ex-governor Rauf Aregbesola of Osun State, Mr. Hakeem Ajasa has been picked as the next Oniru of Iruland in Lagos State as fake news.

According to the family, the selection of Ajasa, a Chief Superintendent of Police (CSP) as the next Oniru of Iruland, is kangaroo and it was not known to the entire family.

The family said in a public notice titled; “Fake News By A Section of Abisogun Ruling House” that the “public and all interested parties are put on notice of the kangaroo selection of a person unknown to the entire Oniru Family to rule over their land and fill the currently vacant Oniru Chieftaincy stool.”

The family, who described themselves as Cheated Members of Abisogun Ruling House, alleged in the notice that was released to the media on Friday that being a policeman, they had information from reliable sources that Akeem Ajasa had harassed, intimidated and threatened other members of his ruling house.

The family insisted that from time immemorial, no member of any royal family could impose himself on the community.