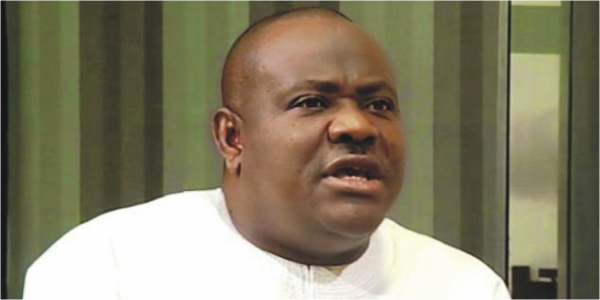 He said this on Friday while speaking with state house correspondents after meeting with President Muhammadu Buhari at the presidential villa, Abuja.

Wike said while the fight against insurgency remains vital, such an approval is against the law.

He said the same amount should also be approved for the Ogoni clean-up and other issues in the Niger Delta.

“However, we are talking about fighting insurgency and no right thinking individual will say that he will not support the government to fight the insurgency.

The governor said contrary to insinuations, his relationship with Buhari “cordial”.

He said he had come to update the president on Rivers state security.

“I’m happy with the discussion and I believe that something has to be done about (security) it. Nothing political, just security issue that affects the state and things that may lead to the breakdown of law and order,” the governor said.

“We talked on security challenges and he received me very well. We don’t have any bad relationship; I come here when he asked me to come.”

Although Godwin Obaseki, governor of Edo state, had announced that the $1 billion was to be used for the fight against insurgency, Vice-President Yemi Osinbajo later said it is for security purposes in all states and not just in the north-east.