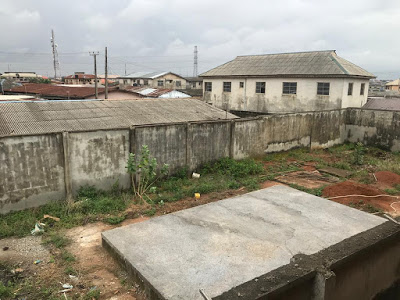 A businesswoman, Yemisi Rosiji, is currently battling with landlords and residents of Isokan-West community of Ijaye Ojokoro LCDA over her alleged plan to set up a gas plant in the wholly residential area of the council.

In 2018, Ms Rosiji is said to have bought half of a plot of land situated at 14, Odunalayo Street and with alleged intention of setting up a gas plant for commercial purpose.

She is also said to have embarked on the construction of the gas plant between two residential houses despite vehement rejection from the landlord association and the community development association (CDA).

The development did not go down well with the landlords and residents owing to fear of explosion that could lead to loss of lives and destruction of properties around the neighbourhoods.

The growing ominous trend of siting gas plants within residential areas in Lagos state in recent times has generated mountainous anxiety among residents and landlords whose hard-earned properties are also put at risk of irreparable destructions.

It was gathered that some elders in the community have persuaded the businesswoman not to bring such plant to the area pointing out the grave danger it portends to human lives if operated.

But construction is still ongoing at the site, against the people’s stance, according to residents of the area.

Checks by our reporter revealed that concerned landlords and residents have made official complains to relevant authorities in Lagos State.

Speaking with our reporter, the Auditor General of the CDA and treasurer of Odunalayao Landlord Association, Mr Ayo Durojaiye, said the community has made several efforts to call the woman’s attention to the reasons why setting up a gas plant in such environment is dangerous to human lives.

According to him, Ms Rosiji has refused all pleas and explanations while she allegedly claimed she has gotten approval from concern authorities in the state to establish her new business interest – a gas plant in the concerned residential territory.

Following her insistence, the association said they are left with no other option than to also report the matter to the relevant authorities.

“We have lodged formal complaints to the Lagos Ministry of Environment, the Lagos State House of Assembly and the Lagos zonal office of the Department of Petroleum Resources (DPR), although, we are yet to get responses from any of the mentioned authorities,” Durojaiye said.

The chairman of the CDA, Mr Aderoju Adeogun also informed that the association has also called on the head of the community, Baale of Iwa-Ife who subsequently summoned a meeting between the community leaders and Ms Rosiji.

At the meeting, Adeogun informed that the woman further maintained that she had gotten approval from relevant authorities including the Lagos State Fire Service, the Nigeria Police, Ministry of Environment, office of the State Surveyor General and the DPR.

A source, however, informed that the leaders and elders of the community have also vowed to resist Ms Rosiji, by all legal means, from setting up a gas plant in their neighbourhood.

“The Baale, however, ordered the suspension of the ongoing construction at the site while asking all parties concerned to reconvene in two weeks,” a source hinted.

But Ms Rosiji in her reaction told our reporter that the narratives were not as it seems to be adding that she has no intention of putting peoples’ lives in danger. She also said what she is trying to set up isn’t actually a gas plant.

She, however, refused to expound further on her position saying she has no squabble with anybody adding that the head of the community, Baale Iwa Ife is presently handling the issue.

“Since I don’t have any altercation with anyone, it is not appropriate to discuss anything on pages of paper or online. Baale Iwa Ife is on top of it, the Baba ILU of the area have waded in, it will be disobedience if I go ahead to do otherwise,” she stated via sms.

In a latest development, officials of the DPR on Tuesday evening sealed off of the construction site of the gas plant and issued ‘stop work’ order.

Residents quoted the DPR officials saying the place in question can never be approved for a gas plant or any other related plant that portend risks to human lives.

Two other gas stations in the area were also sealed off by the petrol resources agency, a source informed.

Newsheadline247 recall the very unfortunate explosion of a gas plant that occurred Thursday, September 24 2020 around Iju-Ishaga-Ajuwon axis in Ifako-Ijaiye Local Government Area of Lagos State – a disaster that once again brought to the fore the perennial calls on regulators to take seriously the rampant cases of siting gas plants and gas retail outlets in residential areas, and more especially in densely populated environments.

Victor Ganzallo, a communication strategist and public commentator recently called on the government and regulatory bodies to act fast and take measures to curb the rapid trends of setting up gas plants and fuel stations in densely populated residential areas.

According to him, the use of gas by the public is even going to increase in the coming days with the beginning of the process of shifting the primary energy for cars in the country from premium motor spirit and diesel to liquefied petroleum gas, compressed natural gas and liquefied natural gas.

He pointed out that the Nigeria populace, irrespective of their class, is awakened to gas usage now. Use of kerosene stoves is in decline. This change in behaviour ordinarily comes with business opportunities for gas plant retailers; thus the surge in the business in recent times.

“More than ever before, it is most imperative at this juncture for the regulatory agencies under whose purview the approval for the siting of gas and petrol stations falls should swing into action and ensure that they are situated in locations that will not constitute needless risk to the lives and properties of citizens. Safety is a prime consideration in plant siting.

“As far as safety of the citizen is concerned, the most important feature of siting is the distance between the site and built up areas. A situation where gas and petrol stations are sited in residential areas needs to be looked into, with some of these stations sometimes even situated right in the middle of two residential houses.

“It is becoming one explosion too many as Lagos has been recording needless, avoidable explosions of various forms lately, Ganzalo Stated.