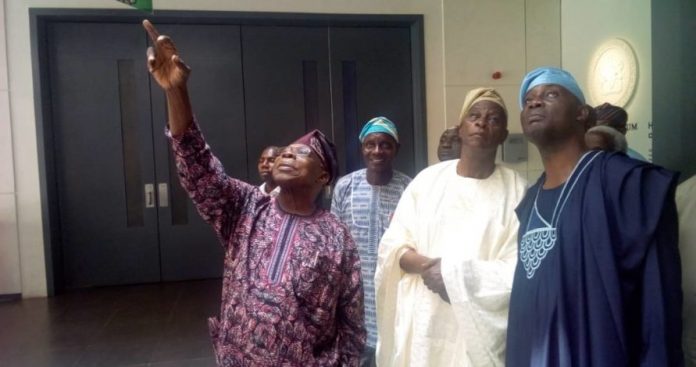 Reports indicate that the close-door meeting which commenced around 12:pm had in attendance an Ogun state governorship aspirant, Gboyega Nasir Isiaka; former Presidential spokesperson to former president Goodluck Jonathan, Doyin Okupe;  and a former commissioner for information in the state, Sina Kawonishe.

All attempts access the meeting was unsuccessful as armed policemen did not allow newsmen and any other person to go near the staircase leading to the meeting .

However, information made available indicate the 2019 presidential elections was the key discussion at the meeting as Obasanjo’s third force movement seeks a political platform which Falae’s SDP offers.

Obasanjo is the conveyer of the third force movement, the Coalition Movement of Nigeria (CNM) while Falae has been visiting stakeholders in Nigeria ahead of the 2019 general election.

He arrived Obasanjo’s penthouse around 12pm and went straight to the meeting.