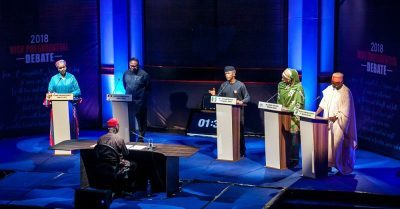 The former Vice President expressed satisfaction with the showing of his running mate, Peter Obi, at the vice-presidential debate at Transcorp Hilton Hotels.

“I watched with pride as Peter Obi laid out our vision to get Nigeria working again,” Mr Abubakar said on Twitter, adding that he cannot “wait for the presidential debate.”

Mr Obi sparred with Vice President Yemi Osinbajo and three other running mates in the five-person debate last night, focused mainly on the economy for about two and a half hours.

Mr Obi was widely praised for demonstrating a good grasp of statistics, and Mr Osinbajo received commendations for his ability to focus on what his government had done as against what the PDP did in its 16 years in power from 1999 to 2015.

Although the debate organisers said last week they expected President Muhammadu Buhari to participate at the presidential debate on January 19, there has been no commitment from the president.

Organisers, however informed that night they have not received indications that Mr Buhari would take part in the debate, but said Mr Abubakar’s public utterances have given them confidence that the main opposition candidate would be available.

Mr Buhari did not honour invitations to debate while running as the main opposition candidate of the All Progressives Congress in 2015.

Concerns that Mr Buhari would shun debate again this cycle prompted some PDP supporters on social media to have Mr Obi boycott last night’s debate. They argued that Mr Buhari is trying to ride on the energy of Mr Osinbajo, rather than present himself for a similar debate as the most consequential person on the ticket.