2019: Taminu Turaki joins in the race for PDP presidential ticket 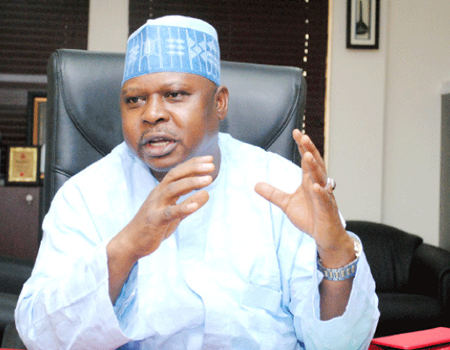 Tanimu Turaki has declared his intention to contest for the presidential ticket of the Peoples Democratic Party (PDP).

Turaki, a former Minister of Special Duties under President Goodluck   Jonathan has consequently set up a campaign committee headed by a two-time governor of Adamawa State, Boni Haruna, as its Director General.

He has also picked another former Minister of Niger Delta Affairs, Dr. Steve Oruh as his Deputy Director General (South) while other members include Col Habibu Shuaibu, Dr. Emeka Nwachukwu, Imade Ize-Iyamu, Abdulrahman Yusuf, among others.

Shola Atere, a veteran broadcast has also been appointed as the spokesman of the campaign organisation.

Turaki, who is the current chairman of former PDP Ministers Forum, while speaking with reporters at his newly inaugurated campaign headquarters in Abuja, on Wednesday said that his knowledge, experience and dynamism stand him out from other aspirants in the party.

“We feel that we have what it takes to unify Nigerians. We need a winning team that can provide level playing ground and opportunities irrespective of where you come from,” he declared.

He said he had met with Jonathan and other leaders of the PDP who he said had given him their blessings.

Turaki also revealed that he had also met with other aspirants in PDP and they had agreed to support whoever picks the party’s ticket in the end.

In his words: “I went to sit down with every one of them. We have spoken and we’ve understood each other. We have a serious national problem that Nigeria has come to see PDP as a saviour of this country.

“If therefore, Nigerians have said that PDP is the only vehicle that will rescue them from this situation, then we the gladiators must be able to subject our interest to the larger interest of Nigerians.

“Anybody who gets this ticket, we have the understanding, all of us will join hands and support him,” he stated.

The former minister, however, boasts he is not afraid in a direct confrontation with President Muhammadu Buhari’s ambition.