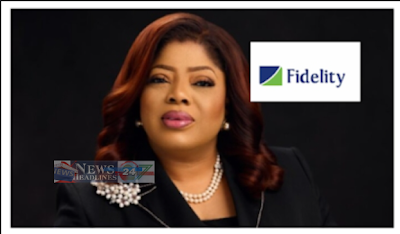 Fidelity Bank Plc has posted an impressive 34.7 per cent growth in profits from N28.1 billion at the end of the third quarter of 2021 to N37.8 billion in the first nine month of 2022, according to the bank’s unaudited financial statements released on the issuer portal of the Nigerian Exchange (NGX) weekend.

According to the statement, Net Interest Margin improved to 6.2 per cent  from 4.7 per cent in 2021 financial year, due to increased market yields while average funding cost remained unchanged Year-to-Date (YTD).

Average yield on earning assets increased by 166bps to 11.7 per cent while average funding cost stood at 4.3 per cent, which resulted in 72.2 per cent Year-on-Year (YoY) increase in net interest income to N111.9 billion.

Commenting on the results, Nneka Onyeali-Ikpe, MD/CEO, Fidelity Bank Plc stated: “We are happy to report sustained growth across key financial indices in our 9 months 2022 results. Gross Earnings increased by 38.7 per cent YoY to N241.9 billion on account of 53.1 per cent growth in interest and similar income to N210.4 billion from N137.4 billion in 9M 2021.

“The increase in Interest Income was driven by improved yield on earnings assets and 16.3 per cent YTD expansion in earnings base to N2.56 trillion.