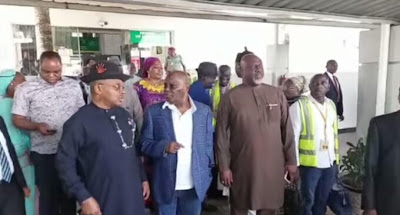 His media adviser, Paul Ibe, informed that Abubakar arrived in Nigeria around 1 pm on Friday.

The former vice-president left Nigeria on Monday night for Europe after the PDP campaign rally in Kaduna.

Meanwhile, the PDP has invited members of the party to attend the campaign rally scheduled to hold in Benin, the capital of Edo.

In a statement on Friday, Debo Ologunagba, PDP spokesperson, said the people of Edo “are very excited and ready to receive” Abubakar and Ifeanyi Okowa, his running mate.

“Ahead of the rally, our party has been receiving a flurry of solidarity messages from various groups, especially the youths in their massive solidarity towards the PDP’s mission to rescue, rebuild and redirect our nation from the misrule of the All Progressives Congress (APC),” the statement reads.

“The PDP has been recording very successful presidential rallies since the flag-off in Uyo, Akwa Ibom state.

“On Monday, October 17, 2022, our presidential campaign rally in Kaduna state was greeted by a massive crowd, which of course, rattled the APC.”

The PDP plans to hold its presidential campaign rally in Edo despite the internal crisis in the state chapter of the party.

Last week, Omobumhe Umoru, a chieftain of PDP, asked the party to suspend the planned campaign until the crisis is resolved.

“You all cannot claim that you’re not aware of the level the infighting in Edo PDP has gotten to. You certainly are aware of the series of litigations the party at the state level is involved in,” Umoru said in a letter addressed to the PDP, Abubakar, and Iyorchia Ayu, national chairman of the party.