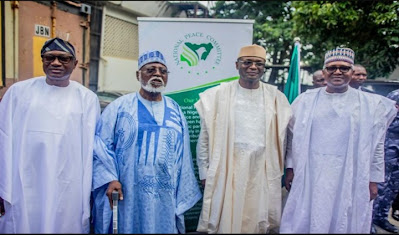 New members have been appointed to the National Peace Committee ahead of next year’s elections.

The committee is a non-governmental initiative conceptualised in 2014 in response to emerging threats to the 2015 general elections.

Since then, it has remained as one of the leading lights and credible organisations in Nigeria’s democratic journey.

It is an initiative made up of eminent elder statesmen who undertake efforts to support free, fair and credible elections as well as intervene in critical issues of national concern through high-level mediated and alternative dispute resolution mechanisms.

The committee said yesterday that all political parties, presidential candidates and their spokespersons will sign a peace accord on Thursday.

They will commit to campaigns devoid of violence, incitement and personal insults, the committee said yesterday.

Abubakar said this in Minna, the Niger State capital, after a meeting with the Chairman of the Independent National Electoral Commission (INEC), Prof Mahmood Yakubu.

The INEC chairman briefed Abubakar on the commission’s preparations for the 2023 general elections.

The former head of state bemoaned the pattern of public communication among political actors, their publicity agents, spokespersons and media consultants.

He said they have amplified the potential for personal attacks, insults, and incitement and have relegated to the background, the civility and decency in public discourse This, he said, has shifted focus away from issue-based campaigns to consolidating identity politics and the politics of thuggery.

“The first peace accord which will hold on Thursday, 29 September 2022 at the International Conference Centre, Abuja is to commit all political parties, presidential candidates and their spokespersons to peaceful political campaigns and rallies, devoid of violence, incitement and personal insults but defined by issues at the very heart of national development and progress.

“The second peace accord will come up shortly before the elections and it is intended to commit candidates to accept the outcome of the votes as long as it is adjudged to be free, fair and credible.

“The National Peace Committee calls on all Nigerians, politicians, political parties, security agencies, the election management body INEC and all stakeholders to ensure that Nigeria is placed first above regional and sectional claims.

“The essence of the meeting is to discuss the preparation for the 2023 election.

“When it comes to elections, our politicians normally go on rampage; there is a lot of disharmony and mudslinging. We see a lot of our voters go and sell their vote,” Abubakar said.

He expressed fear over the elections holding amidst the increasing spate of insecurity that continues to grow across the country.

“The Boko Haram conflict that defined the 2015 election is yet to be quelled and with bandits operating across the Northwest, violent secessionist agitation spiralling in the Southeast and farmer-herder clashes ongoing across the country, the 2023 election is set to take place amidst nationwide insecurity.”

Prof Yakubu said the Commission has successfully implemented eight out of the 14 activities it earmarked for the 2023 elections.

He said: “Regarding the 2023 general elections, we are good to go.

“I have briefed the National Peace Committee on the preparations for the 2023 general elections which is 156 days from today. We are prepared for the elections.

“We identified 14 activities from the publication of notice to the elections day proper.

“So far we have successfully implemented eight out of the 14 activities.”