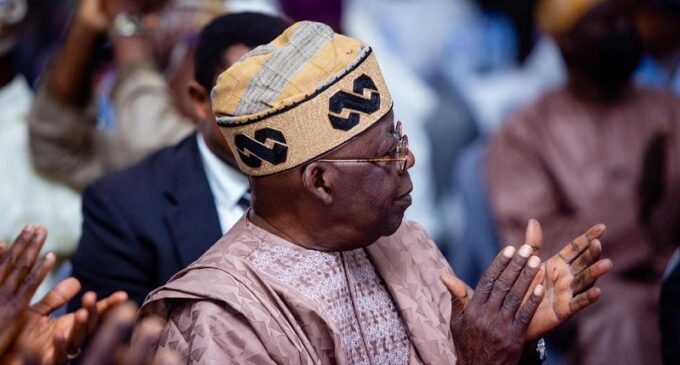 “While we sympathise with the opposition parties, we appeal to Nigerians, who will eventually be the beneficiaries of good governance under Tinubu-Shettima presidency…”

Ajaka, in a statement on Monday, said Tinubu and Shettima are not religious fundamentalists.

“The sterling qualities of our vice-presidential candidate, in the person of Senator Kashim Shettima, has once again thrown the opposition parties off-balance,” the deputy spokesman said.

“They would have preferred our presidential candidate to settle for less so as to make it easy for them to win the election but the choice of the trusted and trustworthy Shettima must have disorganised their evil plans, we understand in the APC.

“While we sympathise with the opposition parties, we appeal to Nigerians, who will eventually be the beneficiaries of good governance under Tinubu-Shettima presidency, to see beyond the sentiments of religion and tribe.

“Both Asiwaju Bola Ahmed Tinubu and Senator Kashim Shettima are not religious fundamentalists or ultra Muslims, their records in public offices are testimonies to rely on.

Ajaka said Shettima has respect for the Christian faith and sponsored many Christians for pilgrimage during his tenure as governor.

“If Borno state has the largest votes in the north-east where Kashim Shettima has been governor for 8 years and now a senator and still politically relevant,” he said.

“If APC has enjoyed massive support from this state and the entire north-east and the emergence of Shettima as our vice presidential candidate will deny the candidate of the PDP the smooth ride in the zone, I think APC and our presidential candidate are politically correct because our main goal for now is to emerge victorious in the coming elections, not forgetting competence which Senator Kashim Shettima represents.”