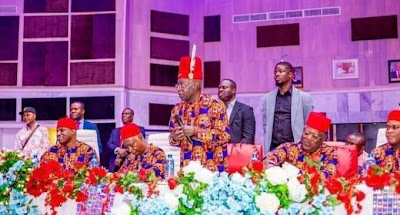 Presidential candidate of the All Progressives Congress (APC), Bola Tinubu, has said that he will protect the businesses of the Igbo if elected president of the country in 2023.

Tinubu spoke on Thursday at the APC presidential campaign rally in Ebonyi.

The former Lagos governor also said he would not tolerate any form of discrimination against the Igbo people.

“I believe in the entrepreneurial spirit of the Igbo. I encouraged a lot of Igbo businesses and investments in Lagos and will even do more if I become president,” he said.

“If elected, there will be no discrimination. Igbo interests will be respected and protected. I will also encourage policies to aid commerce and support south-east states to reach their full potential.

“I will engage the leaders of the south-east in a heart-to-heart discussion on all issues agitating their minds. If elected, I will address all issues and policies that tend to hinder their commerce and enterprise.

“I will work with businessmen and women and encourage them to make the south-east the Taiwan of Africa.”

On his part, David Umahi, governor of Ebonyi, said people of the state should follow Tinubu because he “knows the road”.

“He has shown that he loves and trusts Igbo and our people,” Umahi said.

“He has been here since yesterday. He slept here in Abakaliki and ate our food. Only a man who loves you eats your food.”