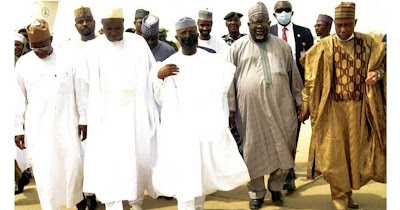 In an open show of a strong message of not being in support of vice president Yemi Osinbajo’s presidential ambition, the entire government functionaries of Jigawa State deserted the state during VP’s scheduled visit.

On arrival, Osinbanjo was received at the Dutse Airport by the Secretary to the State Government, Alhaji Adamu Fanini; Chairman, All Progressives Congress (APC) in Jigawa, Alhaji Sani Aminu Gumel; party executives; state Assembly members, among others.

Osinbanjo was in Dutse to meet with Jigawa APC delegates for a consultative meeting ahead of the forthcoming presidential primary.

It was learnt that the inability of Governor Muhammad Badaru Abubakar to welcome the VP might not be unconnected with his divergent political interest, as he is not in the same camp with the VP, despite both of them belonging to the ruling party.

During the closed-door consultative meeting with the delegates, the VP told them that politics should be seen as a tool for expanding frontiers of progress and development through constructive focus, commitment and hard work.

He said:”Let us modify our political culture in line with the present-time challenges. Let our polity be politics of inspirations conceived with innovative ideas and laudable issues that can bring about future political prospects for even development for our collective interest.”

Osinbajo said politics should be viewed as a vital tool for national cohesion and strengthening of national unity among the country’s divergent races.

He continued: “My reason for aspiring for the office of the President is to serve the Nigerian people. I have no other reason or objective except to serve.

“After I have been in office as a vice president for seven years, I know that God did not give me that opportunity so that I would sit down somewhere and write the history of my service as vice president. “God doesn’t give you a challenge without showing you how to solve them. I know all the efforts we are putting in place, especially led by President Muhammadu Buhari, we will see an

“There is a lot of hope. This country has everything that is necessary to be great: the talents, resources and we also have the men and women who are able to serve. I am very optimistic that all will be well with our country.”