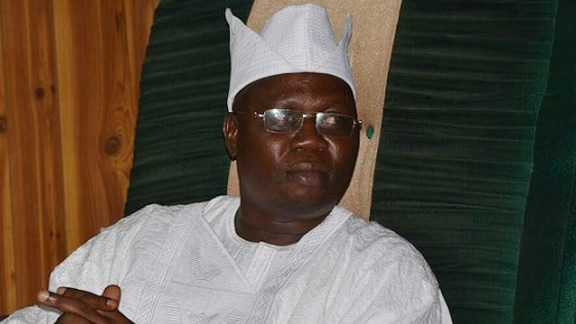 The  Eze Ndigbos in Lagos have declared their support for the choice of Dr Gani Adams  as the Aare OnaKakanfo of Yoruba land just as they declared that they are happy that the “ title came to our own person.”

The leaders of Igbos in the local governments in the state who paid the Aare designate a congratulatory visit in his Lagos home yesterday promised to work with him politically and culturally.
Among the visiting  Ezes are the Eze Ndigbo of Ikeja, Chief Uche Dimgba, Dr Livinus Chimezie, the Eze Ndigbo of Gbogbo, Eze of Cocker /Aguda, Jude Ezego, the leader of the team, Eze of Ojodu, Eze Augustine Ebisi, Eze Peter Umeh of Mushin, odiolowo, Iganmu land, Ejigbo, Agbado Oke odo and the Eze of Iba among others.
Speaking on behalf of the Ezes, the Eze of Ojodu, Ibisi, said the Igbos are in solidarity with the Aare designate, stressing that they will work with him politically and culturally.
The Ezes who brought drinks, Kolanuts and Alligator pepper with them to their visit which they used for an extensive prayer at the meeting said the onus rests on the Aare to give them the direction that pleases him for them to follow.
Pledging that the Igbos would always work with the Aare, the Eze of Ojodu said “ we will continue to be with you, we only pray that God will continue to give us life to continue to be part of you.
“We are delighted about your belief in culture and tradition. Our culture is who we are.  But people now mix it with religion. Culture is older than religion. We are what we are already before religion.
“ The time is gone when the impression people have about the Aare is to fight war. The Kakanfo of today is for progress, not war and we are here to declare to you that we are partners in progress.
Thanking the Ezes for their visit which he described as historic, the Aare Ona Kakanfo said he was not surprised because the Igbo community had always associated with him and his group.
The Aare Onakakanfo said the title is the most prestigous in Yoruba land, adding that the title is not without history.
According to him, he is mandated as the Yoruba Generalissimo to defend the interest of the Yoruba and ensure unity of the race.
He added that, like the Igbos, the Yorubas craves their identity, even as he pledged that he would love to maintain the cordial relationships that had existed between him and the Easterners, submitting that Igbos never constituted a threat to the Yoruba land.