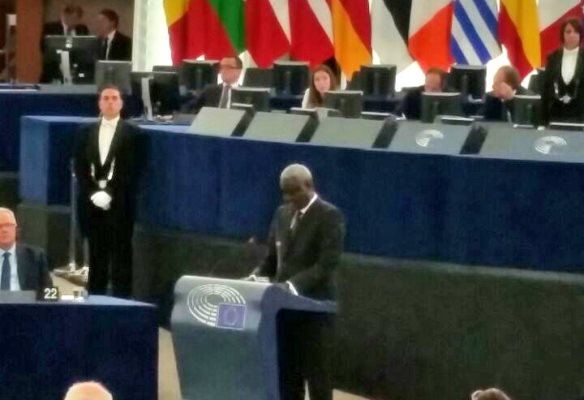 The Africa Union Commission has expressed deep shock by US President Trump’s recent comment on immigrants from Africa and Haiti.

Dr Moussa Faki Mahmat, the African Union Commission chairman, on Thursday said: “We were deeply shocked by the messages of contempt, hatred, desires for marginalisation and exclusion from Africa.”

“At the moment when your meeting is being held, Africa has not finished digesting the statements of the President of the United States,” Dr Mahmat said at the opening the 27th ministerial meetings of the AU in Addis Ababa.

Dr Mahmat went on: “Such statements, in the wake of others on Jerusalem and the reduction of contributions to the peacekeeping budget on a global scale, indicate that multilateralism is in serious crisis. The continent cannot be silent on this subject.”

President Trump has denied describing Haiti and Africa as ‘shithole countries’, at the White House meeting about a week ago. The meeting focused on immigrants entering the US.

“The language used by me at the DACA meeting was tough, but this was not the language used. What was really tough was the outlandish proposal made – a big setback for DACA!” the US president twitted on January 12.

President Trump has since been the subject of criticism from Africa and the rest of the world.

A senator who attended the meeting told journalists that President Trump said: “Why are we having all these people from shithole countries come here?”

“We should bring in more people from places like Norway,” he added, according to US media reports.

Lukman Omikunle - November 30, 2022
The brilliant Christmas Lights of the UBA Foundation Gardens at the UBA Head Office on the Marina in Lagos, were activated by the bank’s...