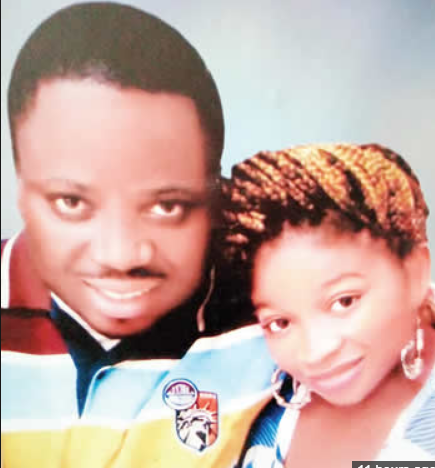 Olaoluwa Adejo, a banker, has been accused of the brutal murder of his wife, Maureen, in the presence of their son.

Adejo has been taken into custody by the Lagos state police command.

PUNCH reports that Richard, the couple’s five-year-old son, gave an eyewitness account of the incident.

Richard, who is the eldest of the couple’s three children, was quoted as saying that his father inflicted machete cuts on his mother, and also forced her to drink a local insecticide, popularly known as Otapiapia.

The incident reportedly took place on Sunday, November 12 at Peluola street, Oworonshoki, in the Bariga area of Lagos.

Kate Jonathan, the mother of the victim, said her daughter had complained that her husband had threatened to kill her.

She said the deceased moved out of her matrimonial home prior to her death but returned only to attend a cultural play at her children’s school.

Jonathan said she got a call from an unknown person on Sunday informing her of her daughter’s death.

“I was called on the telephone by an unknown number around 4pm on Sunday, November 12,” she said.

“The caller said, ‘Your daughter’s husband has killed her at Oworo’.”

After depositing the victim’s body at the Gbagada General hospital morgue, the accused was said to have reported to the Oworonshoki police station that his wife committed suicide by consuming the local insecticide.

The matter has been transferred to the state criminal investigation and intelligence department, Yaba.

Chike Oti, public relations officer of the police, said an investigation into the incident is in ongoing.