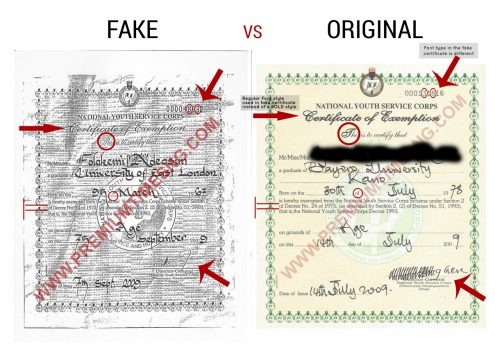 A former director of mobilisation at the National Youth Service Corps (NYSC), Anthony Ani has stated that it is not proper to apply for an exemption certificate from the scheme.

He said it is the corps that determines if a graduate would be exempted or undergo the one-year programme.

Premium Times NG had stated in an exclusive report that the exemption certificate of which the current Minister of Finance, Kemi Adeosun presented when she was appointed into the federal cabinet is ‘fake’.

But the NYSC responded saying Adeosun applied for exemption certificate and that it would investigate the issues raised by the newspaper.

However, Ani said applying for any certificate from NYSC is alien to the corps.

Below is the interview transcribed by Premium Times NG:

Under what circumstances, first, can you apply for exemption (from youth service)?

Thank you very much. First and foremost, I have to comment based on what I saw, the documents I saw, and if those documents were the documents claimed to have been submitted, erm, I want to emphatically say no, they wouldn’t have emanated from the NYSC. One is that it is important for Nigerians to know the process of mobilisation in the NYSC. Section 2 of the NYSC Act which incidentally is embedded in the constitution under Section 315, states categorically that once you graduate, you are supposed to make yourself available for mobilisation. And you don’t apply for either NYSC certificate or NYSC certificate of national service or certificate of exemption, you present yourself for mobilisation.

The system will determine whether you are to be exempted or you are not to be exempted. So, according to the law, all those who graduated with effect from 1974, who studied abroad or in Nigeria, and you are not above 30 years at the point of graduation, you are supposed to make yourself available for mobilisation and you will be deployed. If you are above 30, you will be exempted.

The other category of graduates that will be exempted are those who have served in the Nigerian Police or the military for not less than nine months, if you have an honours award, if you are with the defence or security (DSS, or NSO as it used to be). These are the only people that have been exempted. But even if you graduate at the age of 20, you are in US, and you have not made yourself available to be mobilised, whenever you come back, even if you are 60 years, you have to undergo the NYSC.

Let me jump in and ask. The NYSC themselves released a statement saying yes, they saw the application for exemption. Doesn’t then suggest that a certain process is on?

Erm, maybe somebody must have applied, but that is not the process. You can write, but that is not the process. I have told you the process, you [have to] make yourself available. During mobilisation we announce that we are doing mobilisation process. Those who graduated in Nigeria, their student affairs officer brings the list of those who are graduates and we begin processing it. Now, anywhere in the world you are, you [can] access us online. If you are a graduate of any university outside the country, you [can] access us. You will now fill the form you will upload everything about you: your international passport, your certificate, school cert certificate, your transcript, everything will be uploaded and it is processed. In fact the system has now been designed that once you are above 30 the system will automatically put you for exemption. But if you are less than 30 or you are 30 at the time you graduated, the system will mobilise you.

If I understand you clearly, if one is below 30, you have to make yourself available then you are deployed so…

But can’t people make themselves available, if they are below 30 and still be exempted upon application for exemption, or it doesn’t apply?

It is not so. It is not possible because it is against the NYSC Act.

So, in this particular situation now, when you apply for exemption, you’re expecting a certificate back. How long does this process take?

I am also wondering that in this particular case, the one being investigated by the authorities of NYSC, if for instance, a candidate goes through school, graduates and then at a certain point he is perhaps ill and is unable to avail himself at the point where he is about to turn 30 but has already undergone the process. What happens?

What if I graduate when I am below 30 but I did not get to serve or I delay until when I am above 30 and then I come to NYSC. Can’t I be exempted?

If you read Section 2, I mean Section 13 of the NYSC Act, ordinarily, not making yourself available for service is a criminal offence. Not making yourself available is a criminal offence. However, whenever you want the NYSC certificate, whether you delay it until your are 60 years old, you must come to serve! You must come to serve because you graduated when you were below 30. That is the law. That’s the law!

Okay I am just wondering now because this particular case, the system has gone through all of those documents: Ogun state government, the Presidency, the DSS. Doesn’t this mean there isn’t any penalty?

I wish you go through Section 13 of the NYSC Act. If you give false information concerning the NYSC you are liable. If you present a certificate that was not issued by NYSC, you are liable. It’s a criminal offence. Whoever is employing anybody in this country whether private or government, once you are coming in to take that appointment you are supposed to present your NYSC certificate; either Certificate of National Service or Certificate of Exemption. And it is also the responsibility of your employer to request for it, that is what the law says.

Now, like any other society, there were some people, prior to the time we computerised the NYSC (and I must give thanks to the past two DGs and the present one on ground –these are the people who made sure we computerised the NYSC. Arising from the faults that was taking place in that system, we had syndicates who were not even NYSC staff but they were printing NYSC call up letters, NYSC certificates and doing all sorts of things.

But these gentlemen, the two past DGs and the present one, insisted that the thing must be computerised. Right now as I speak, no one can falsify NYSC certificate, NYSC call-up letter, or even the operations because even for you to register in camps you have to register with your thumb-print, biometric. So that aspect is gone. But there was a time when even in Area 10 [in Abuja], they were producing NYSC certificates and misleading people, collecting money and doing it. But NYSC has put a stop to that.

Let me come in here, because you have been in the system and know the process from A to Z Can you categorically tell us if the certificate is fake or genuine?

The certificate that I saw, that one that I saw, the one that I saw online, if it is the real one that they are talking about, it was not issued by the NYSC. I don’t know who issued it. It was not issued by NYSC. Because what I saw there, the signatory to that certificate was our DG who left in January and General Tsiga took over from General Bomoi. General Tsiga was a sitting DG as at that September, 2009. I don’t know where the certificate came from but NYSC cannot make that mistake. The NYSC that I served, that I know, can never make that type of mistake.

Even though you said in the past you had come across where certificates where forged and the system is sanitised under the current and the past DG. So it is very likely, the processes in the past we had many irregularities not necessarily the fault of the candidates themselves.

No, no, no! The process was okay. But because it was manual and we had not computerised, people from outside capitalised on it, misleading members of the public collecting money and giving certificates. You must have heard when we had fake NYSC camp. [inaudible] But we had to put a stop to all these through this computerisation. So, what I am trying to say is that even members of staff, you had to go to the right person to make inquiry. You don’t meet anybody standing in NYSC office and then you ask him; you go to the director in charge or you go to the DG. [in audible]

So, our system had always been perfect. Our system had always been there but you know, as the corps members had been increasing and everything, there was need to computerise and there was need to check whatever excesses that was happening outside the system because when it happened they will be calling NYSC, people will be calling NYSC. But that certificate definitely, NYSC cannot write that type of certificate.

Which one did you say you saw online? Because there may be several ones now, is it the one reported by PREMIUM TIMES you saw?

Yes, the one reported by PREMIUM TIMES.

Why are you saying that the NYSC cannot make that mistake in terms of the signature by Bomoi?