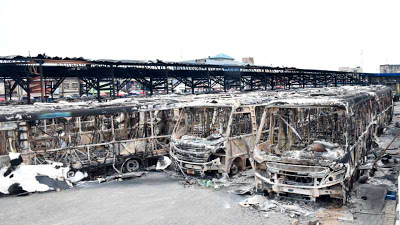 The President of Awori Welfare Association of Nigeria (AWAN), Mohammed Olagbaye, has condemned the destruction of public facilities and private business in Lagos State by hoodlums who infiltrated the recent #EndSARS protests.

Olagbaye, a former Lagos State Commissioner for Finance, on Thursday, specifically condemned the attack on the palace of the Oba of Lagos, Rilwan Akiolu, by the invaders.

He also described the invasion of the historic Lagos palace as a desecration of Yoruba cultural heritage and values.

“This gang razed monuments, institutions, police stations and wreaked immeasurable havoc. We disapprove of these in its entirety.

“The Awori, as the original largest landowners of Lagos State and parts of Ogun State and as part of the Yoruba, are known for their tolerance and democratic credentials.

“We completely agree with all the demands of the protesters but will like to appeal for peace to reign whilst we await federal and state governments to unmask the perpetrators of these dastardly acts, including the shootings, with appropriate sanctions and address the demand of the protesters as promised, in a transparent manner to give credibility to government actions, for better future for our children.

“Whilst, we reiterate the fact that no compensation is enough to restore the loss of anyone, governments should heal our land and console the families of the victims adequately,” Otegbeye said.