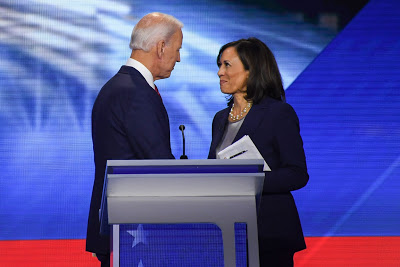 White House hopeful Joe Biden and newly minted running mate Kamala Harris roll out their joint campaign Wednesday, making history with a woman of color on the presidential ticket and pledging to unify a fractured America.

The Democratic duo, unveiled Tuesday by Biden after a months-long search for his partner in the race, now embark on the 83-day sprint to the election face-off against President Donald Trump, who they accuse of sowing division and denigrating minorities.

The choice of Harris, a 55-year-old US senator from California and daughter of Indian and Jamaican immigrants, was kept secret until the last moment, even though she was widely perceived as the wire-to-wire frontrunner.

In footage released Wednesday, Biden is seen speaking with her by video chat, apparently at the moment he told her of his decision.

“Oh my God. I am so ready to go to work,” Harris replies.

Biden’s VP reveal marks a crucial moment as he aims to build a broad coalition of voters to defeat Trump.

It also offers a chance to capture momentum in a campaign turned upside down by the coronavirus pandemic, which has largely confined the 77-year-old Biden to his home in Wilmington, Delaware.

The Biden-Harris ticket already strikes a contrast with 2016, when nominee Hillary Clinton and running mate Tim Kaine struggled to unite a Democratic Party weakened by infighting between her supporters and those of progressive candidate Bernie Sanders.

Harris’s politics are to the left of Biden’s, but they have made a point of showing they are a team with shared values and goals.

Several observers have hailed Biden’s choice of Harris, noting that despite their clashes during the primary race last year they appear to complement one another.

“The character of our country is on the ballot this year and I’m honored to serve by @JoeBiden’s side as we fight to rebuild our country back better,” Harris tweeted Wednesday.

Harris, a former California attorney general, is the first woman of color and first Indian American to be a presidential running mate for a major US party, and personifies the diversity seen as key to building enthusiasm for the Democratic ticket.

Black lawmakers and activists were largely thrilled with the pick, and the group Latino USA said Harris could help boost support for Biden among the influential constituency.

Scheduled to appear with Biden in Wilmington at about 4:00 pm (2000 GMT), Harris will be perceived by many voters as a safe pick, a known quantity vetted during her time as a presidential candidate and tested on the campaign trail.

She is also a fierce advocate of economic equality and racial justice — positions likely to resonate in an election year marked by a historic reckoning on race.

She has valuable Capitol Hill experience, has shown her tenacity in holding Trump administration officials to account, and is considered a top-rate political communicator.

Biden has made clear he believes Harris has the policy proficiency and the governing experience needed for the White House.

“If @KamalaHarris and I are elected, we’re going to inherit multiple crises, a nation divided, and a world in disarray,” Biden tweeted. “She’s ready to lead on day one.”

Trump, who last month acknowledged Harris would be a “fine choice” for Biden, attacked her following Tuesday’s announcement as “nasty” and a radical leftist who would implement “socialized medicine” and confiscate Americans’ guns.

But he and his campaign have appeared to struggle to formulate effective attack lines against a Democrat they long knew was a top VP contender.

Harris, who is two decades younger than Biden and Trump, could appeal to younger voters and women, particularly those in the suburbs who have been fleeing the Republican president, according to polling.

Trump sought to defend that ground Wednesday, insisting that “the ‘suburban housewife’ will be voting for me.”

The next 11 weeks will likely see Harris attacking Trump, something she eagerly did on the Democratic debate stage when she branded him a “predator” of vulnerable Americans.

She has already savaged him over what she and Biden say is a failure to address the coronavirus crisis.

“In the middle of a pandemic, the president is trying to rip away health care,” Harris charged in a video Wednesday.

For Harris, being elevated onto a presidential ticket is political gold. In she and Biden win, the telegenic but tough Harris would almost certainly become the 2024 or 2028 Democratic presidential frontrunner.

Biden would be the oldest person to take the office, and there is broad speculation that he would serve one term and prepare his deputy to succeed him.