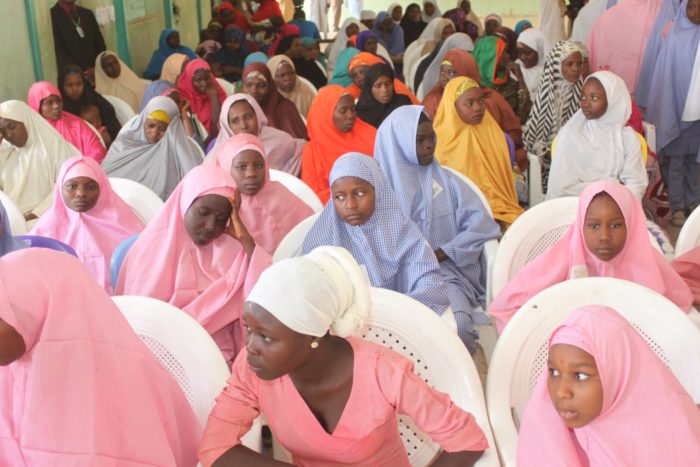 ……military moves them to Damaturu for medical check-up

Boko Haram insurgent has released 76 of the kidnapped Dapchi schoolgirls. Earlier reports stated 105 of the girls were released by the deadly Boko Haram group.

But the information minister, Lai Mohammed, had corrected the figure announced earlier, insisting that only 76 and not 105 were released.

The reports say five of them are dead.

However, the seventy-six abducted Dapchi schoolgirls released by Boko Haram insurgent are being referred to hospital for medical check-up.

It was gathered that the military are taking the girls to Damaturu, capital of Yobe state for medical check-up.

According to Presidential Aide Shebu Garba, the released girls have been transported to their homes.

The release of the girls came barely a few days after Defence Minister Dan Alli promised that the abducted Dapchi schoolgirls would be rescued.

They were abducted by a faction of the Boko Haram fighters at the Government Girls Technical College, Dapchi in Yobe state on Feb. 19.

Latest official reports say the rescued Dapchi schoolgirls were being referred to the General Hospital for profiling by the military.

A parent of one of the girls, Malam Ali Abdullahi, said: ‘’Immediately the insurgents dropped them from the truck that they were brought in around 8 a.m., the girls all ran home.

“Now, the Army told us to bring them to the hospital for checking.

“As you can see some of the parents are not willing to let their daughters out of their sight. But the Army are insisting,’’ he said.

Vehicles have been stationed at the hospital to convey the girls to Damaturu.

Most of the girls at the hospital looked malnourished and wore Hijab (Islamic head and body cover).

Adamawa Government has expressed joy over the release of Dapchi school girls by Boko Haram.

The Commissioner for Information and Strategy, Ahmad Sajoh, said it was good news to the government.

“As a government we are indeed very happy, we thank God for the release which signified the beginning of the restoration of confidence in our security operatives,” Sajoh said.

Also speaking, the member representing Michika/Madagali Federal Constituency, Adamu Kamale said he was happy with the development which he described as “answer to our prayers.”

“We thank Mr President for his effort and urged for its sustenance to secure the release of others abducted in other places like my constituency,” Kamale said.

Amharic M-grah, a Dapchi resident, whose daughters were among the 110 abducted students, told TheCable that his children were brought back on Wednesday morning.

“The report is true. I have seen my two daughters who were kidnapped last month,” he said.

Another resident said there is confusion in the town as many people are running out of fear.

“Boko Haram just returned the kidnapped girls this morning. They brought them back in the same set of vehicles which they used in conveying them last month,” the resident said.

“People are scared because they do not know what the insurgents are up to.”

Defence minister Mansur Dan-Ali gave the assurance on Saturday during a television programme.

“It can be earlier; maybe a week, it can be two weeks, but we are on it, and I’m telling you with all sense of sincerity that we are closing in on them,” he told ChannelsTV.

The minister revealed that all necessary efforts were being made to ensure that the girls return safely as soon as possible.

“We have dispatched all the surveillance devices we have in terms of air, human resource, intelligence, and other forces that needed to be in place by all possible means and we have made sure that all that’s needed is being done to see that these girls are being found, wherever they are.”

Dan-Ali was also confident that the girls would return in the shortest time owing to the intelligence at the government’s disposal, though he cannot say the exact time when it would be.

President Muhammadu Buhari had said the life of every citizen matters to his administration.