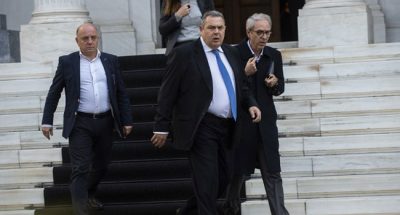 Kammenos who is head of the main coalition partner of Prime Minister Alexis Tsipras announced his resignation on Sunday ahead of the upcoming parliamentary vote to end a 27-year name dispute with Macedonia.

“The Macedonia issue does not allow me not to sacrifice my post,” Panos Kammenos said after a meeting with Tsipras.

“I thanked the prime minister for the cooperation and I explained to him that for this national issue we cannot continue,” he said, adding that his Independent Greeks party “is pulling out of the government”.

A Greek prosecutor had on Saturday ordered an investigation into allegations of threats against lawmakers over an upcoming parliamentary vote to end a 27-year dispute with Macedonia, a judicial source said.

Macedonian lawmakers voted to rename their country the Republic of North Macedonia on Friday and the agreement now needs backing from the Greek parliament to come into effect.

However the proposal has been met with resistance by many in Greece, who object to its neighbour being called Macedonia because it has its own northern province of the same name.

Ahead of the vote in Athens, two news websites alleged that a prominent member of Greece’s main opposition New Democracy party — which rejects the name deal — called on its members to phone MPs of the nationalist Independent Greeks (ANEL) party and urge them to vote against the agreement.

ANEL is the junior party in Greece’s ruling coalition and strongly opposes the name change, a rift that threatens to destabilise the government of Prime Minister Alexis Tsipras, who helped broker the deal.

The investigation, according to judicial sources, is looking into whether personal data was violated as part of the probe.

ANEL leader Panos Kammenos, who is Tsipras’ defence minister, has threatened to pull out of the government when the deal comes to a vote, but some of his party’s MPs remain ambivalent.

Tsipras will have a crunch meeting with his coalition partner on Sunday morning in order to reach a make or break decision ahead of the vote.

If Kammenos refuses to back down, Tsipras hopes to rely on lawmakers from the small pro-EU To Potami party to get the agreement approved.

Macedonian Prime Minister Zoran Zaev on Saturday called on Greece to end the two nations’ decades-long dispute by ratifying the deal to rename his country The Republic of North Macedonia.

Macedonian lawmakers approved the agreement late Friday. It now needs backing from the Greek parliament to come into effect.

US Secretary of State Mike Pompeo welcomed the parliament’s decision, praising the Macedonian leader’s “vision, courage and persistence” in seeking a resolution to the dispute with Greece that would allow it to join NATO and the European Union.

“The United States sees this as a historic opportunity to advance stability, security and prosperity throughout the region,” Pompeo said in a statement released from Washington.

Eighty-one of the Macedonian parliament’s 120 members backed the name change, securing the required two-thirds majority to push it through.

Zaev, who came to power in May 2017, is now looking to his Greek counterpart Alexis Tsipras to uphold his end of the deal, which the pair brokered last year.

“Within 10 days… if we see everything is in order, we will vote,” Tsipras said on Friday evening.

Athens has promised to lift its veto on Skopje’s attempts to join NATO and the EU if Macedonia changes its name.

Zaev said he was “convinced that Greek lawmakers will recognise the historical significance of the agreement.”

The accord aims to start unraveling one of the world’s longest diplomatic disputes. It began nearly three decades ago, with Macedonia’s declaration of independence, but has roots dating back centuries.

Since 1991, Athens has objected to its neighbour being called Macedonia because it has a northern province of the same name. In ancient times it was the cradle of Alexander the Great’s empire, a source of intense pride for modern-day Greeks.

Last June, Zaev and Tsipras reached a landmark compromise over the name dispute. Their efforts brought the pair a nomination for the 2019 Nobel Peace Prize.