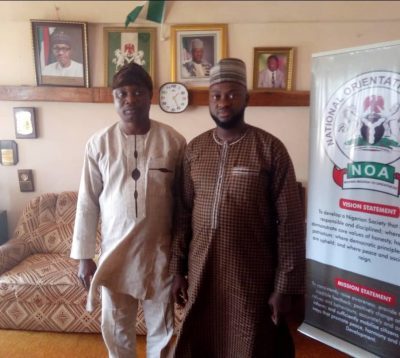 The National Orientation Agency (NOA) on Tuesday declares its interest to partner with the upcoming ‘Kwara Governorship Candidates’ Forum’ with youths.

The State Director of the agency, Mr Olusegun  Adeyemi made the declaration when the convener of the much-publicised forum, Mr Lawal Olohungbebe, and his team paid a courtesy visit to the agency in Ilorin, the Kwara state capital.

Adeyemi, while addressing the organisers in his office said the agency was glad such a laudable event is being organised by the youths in the state adding that an unprecedented event like ‘Candidates Forum guarantees national development.’

“We are glad that an event of this nature is being organised by youths in the State themselves,” Adeyemi said.

He added that “The National Orientation Agency (NOA) is committed to enlightening citizens in different ways by which national development can be sustainably achieved and with this Candidates forum such development is guaranteed.

“NOA is ready to partner with the organizers of this event in any possible way.

“In fact, we still have a lot of areas of partnership aside this laudable and unprecedented event in Kwara State. We commend organizers of CF for this initiative. This is a welcome idea.”

In his response, Mr Olohungbebe expressed deep appreciation for the huge support pledged by the agency. He further explained the motive behind the much anticipated and first edition of the governorship candidates’ forum in the state.

“The motive behind this event is to provide a foundation for a participatory governance in Kwara State.

“We understand and appreciate the roles NOA as an agency plays in fostering an informed society and that’s the reason we have sought the agency’s partnership,” Olohungbe stated. 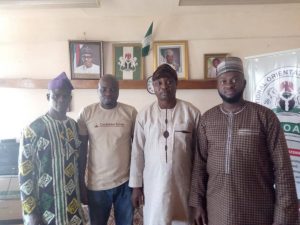 The Kwara state 2019 governorship Candidates’ Forum is being put together by the Hannis Institute for Development Studies (HIDS).

It is an event deliberately set to give the entire youths in Kwara State a rare opportunity to interact and brainstorm with all governorship candidates in the state.

In a video recently released by HANNIS, Olohungbebe described “Candidates’ Forum as a Paradigm shift from passiveness to activeness.”