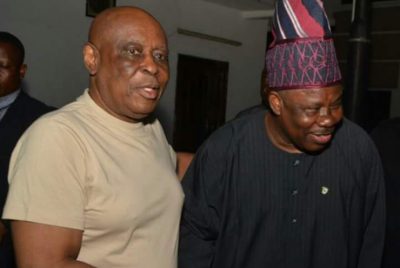 Emerging details have indicated the factionalised All Progressives Congress (APC) in Ogun State is making parallel plans ahead of President Muhammadu Buhari’s visit to the state, Monday.

Buhari is billed to visit the state on Monday (today) in pursuit of his re-election.

There was palpable confusion on Sunday as the party prepares to host the President.

The party which has been factionalised in the state has a former governor of the state, Olusegun Osoba leading one side, while the other is led by the incumbent state Governor, Ibikunle Amosun.

Amosun has been allegedly sponsoring the Allied People’s Movement (APM) while he remains the Ogun Central senatorial candidate of the APC in the coming election.

The Osoba faction which is in control of the caretaker committee of the party in the state, has been running the affairs of the party some weeks after the controversial party primaries which split its members.

The Osoba faction is recognised by the party’s national leaders and the National Working Committee.

Report has it that while Osoba’s faction was planning for Buhari’s visit, Amosun was said to have mobilised various people and organisations across the state to the venue, MKO Abiola International stadium.

Osoba’s faction had issued a separate statement signed by the state Publicity Secretary of the APC Caretaker committee, Tunde Oladunjoye, announcing the visit of Buhari to the state.

The statement reads in part, “The rally, which will hold on Monday, February 11, 2019 at the MKO Abiola Stadium in Abeokuta, Ogun State from 10.00 am, will see President Buhari handing over the flag of the party to its gubernatorial candidate, Prince Dapo Abiodun.

“National and South West leaders, state governors and executives of the party are billed to attend the rally.

“While enjoining our members, supporters and well-wishers to come in their large numbers and arrive early for the rally, we want to remind the members of the public, especially the security agents, that this is an APC rally.”

It added, “We must ensure a peaceful and hitch-free event that will give Mr President a befitting reception and make the event memorable.”

Also, Amosun’s faction, in its move to host Buhari, sent its statement also announcing the coming of the President to the state.

Taiwo Adeoluwa, the Secretary to the State Government, in the statement made available said that the President would meet with members of the state traditional council.

The statement reads, “Public service announcement: President Muhammadu Buhari ‘s scheduled visit to Ogun State for the APC presidential campaign rally and parley with the chairman, and, members of the Ogun State Council of Traditional Rulers will now hold on Monday, February 11, 2019.

“All stakeholders are enjoined to please take note and adjust their programmes accordingly.”