HomeAGENCY REPORTBuhari: No date yet to reopen Nigeria’s borders
National

Buhari: No date yet to reopen Nigeria’s borders 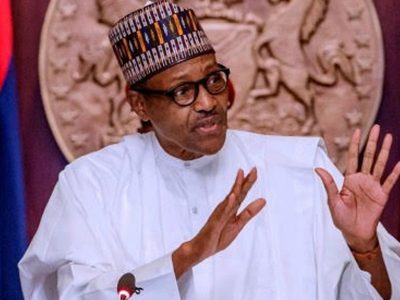 President Muhammadu Buhari says he has not given any date for the reopening of Nigeria’s land borders.

He said that the closure would remain until the situation improved.

In August, Nigeria partially closed its land borders mainly to check the mass smuggling of products like rice and petrol.

Later on in October, the Comptroller-General of the Nigerian Customs Service, Hameed Ali, announced that “all goods, for now, are banned from being exported or imported through our land borders and that is to ensure we have total control over what comes in.”

It was the first official confirmation of a full border closure.

He said that, reopening the border depends largely on the “neighboring countries ability to comply with the rules governing cross-border trade”.

Nigeria’s neighbouring countries (Niger and Benin) that were affected economically by their inability to export into Nigeria then made demands. That led to a tripartite committee being formed.

The committee is still working to resolve contentious issues.

Undeterred by the criticism, the Nigerian government recently announced that the borders will remain shut till at least January 2020.

Buhari has now said there is no end date in sight.

The president said Nigeria’s domestic fuel consumption had dropped by more than 30 per cent since the closure, thus suggesting that about a third of reported fuel consumption by Nigeria was being smuggled to neighbouring countries where petrol price is much higher.

Garba Shehu, Buhari’s spokesperson, in a statement in Abuja on Monday, said the president made the disclosure when he received a delegation of Katsina State Elders Forum in his country home in Daura, Katsina State.

Buhari said his administration’s directive on the border closure was meant to curb smuggling, especially rice, and that so far, the closures had saved the country huge sums on import bills.

He said his administration was betting on same measures to rekindle the country’s agricultural rebirth.

The president lauded actions taken by the President of Niger Republic, Muhammadou Youssoufou, including the dismissal of officials and a ban on use of the country as a dumping ground for Nigeria-bound smuggled goods.

Mr Buhari noted that the measures taken by Niger were helpful and supportive to Nigeria’s goals.

He acknowledged the hardship of border communities following the ban on sale of fuel at stations 20km to the border, a restriction that also saw to the closure of all fuel stations in his native home, Daura.

”Farmers must be protected, dishonesty is deep rooted in the country. Otherwise the border closure would not have been warranted,” he said.

He said the restriction was a temporary measure as the Nigerian Customs Service needed to ascertain outlets involved in real sale of products and those being used for smuggling.

Buhari told the delegation that he intended forging ahead with poverty alleviation schemes and the agricultural and livestock reforms started by the administration in the first term, since the election was behind him and a government now in place.

He explained that the reforms, especially those relating to the settlement of livestock farmers would take time to accomplish.

He said that his deliberate choice of tested farmers as his past and current ministers of agriculture was informed by the need to carry his vision through.

Earlier in his remark, the representative of the Chairman of the Elders Forum, Aliyu Saulawa, commended the achievements of the President and Governor Aminu Masari of Katsina State in curbing the menace of bandits, kidnappers and cattle rustlers.

He, however, drew a long list of requests which included a special intervention fund to assist victims of attacks, completion of the 10 megawatts wind power project in the state, setting up of a North-West Development Commission and setting up of Ruga farm settlements.

According to him, farm settlements are urgently needed by herders.

The Elders Forum also made a case for numerous infrastructure projects for the state, as well as for keener federal government scrutiny of benefits of social investment schemes.

The president promised to look into their requests.

He added that his constituency was the whole country, and expressed his determination to be fair to all, including those that voted him into office and those that did not.