Buhari takes Next Level campaigns to Ebonyi, vows to sustain war against corruption 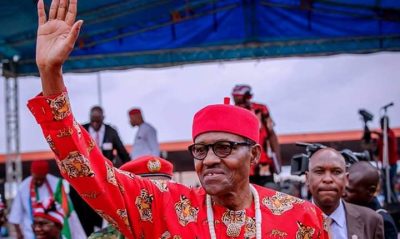 The presidential candidate of the All Progressives Congress (APC) in the Feb. 16 presidential election, President Muhammadu Buhari has pledged to sustain the ongoing war against corruption if re-elected.

Buhari made the promise while addressing a crowd of APC supporters who thronged the Pa Oruta Ngele Township Stadium in Abakaliki on Wednesday for the APC presidential mega rally.

He said that his administration’s commitment to repositioning the country and sustaining the anti-graft campaign were irrevocable.

Buhari said that fighting corruption was a difficult task, but that his administration would not relent in the struggle.

”We are fighting broad war against corruption and this system is a difficult process but we are doing our best by trying to reorganise the Nigeria Police Force and Judicial system.

”When we vote people into public office who are without houses and good cars, within two years they will own cars, build houses in Abuja, Europe and America.

”The important thing that I assure you is that I as a President today have never been in a position of abusing trust.

”As a governor in the defunct North-East state now made up of the six states, as a minister of Petroleum for over three years and as a former Head of State, I was arrested, detained and investigated but they never found anything against me.

”If you vote me back I will make sure we realise the potentialities of our people and use the resources God has given us to make life better for the people and he future generation,” he said.

The President said is administration had achieved success in the implementation of the three key cardinal programmes it promised to pursue during the 2015 presidential campaign – the anti-graft war, insecurity and rebuilding of the economy.

He said that the military had successfully freed the local government areas previously occupied by the Boko Haram insurgents.

The President said that the nation’s economy has been repositioned through agriculture and agro-based businesses and added that the country was no longer importing rice as it used to.

”We asked the Ministry of Agriculture and the Central Bank to give soft loans to our farmers and those who don’t have something doing and who do not feel too big to farm went to the farm.

”Today we have achieved food sufficiency and the money we have saved from rice and food importation we use to provide infrastructure.

The President who thanked the people of Ebonyi for the rousing welcome urged them to vote for him and other candidates of the APC in the forthcoming general elections.

Earlier, the Minister for Science and Technology, Dr Ogbonnaya Onu, said that Buhari had performed well to deserve re-election and urged the people to vote massively for the re-election of the president and other candidates of the party in Ebonyi.

The News Agency of Nigeria (NAN) reports that Mr Rotimi Amaechi, Director-General of the Buhari Campaign Organisation, and Minister of Transportation and Dr Chris Ngige, Minister of Labour and Employment, accompanied the President to Ebonyi.