HomeNationalIf Buhari thinks he can bamboozle Yoruba with June 12 declaration, he...
National

If Buhari thinks he can bamboozle Yoruba with June 12 declaration, he has failed – Adebanjo 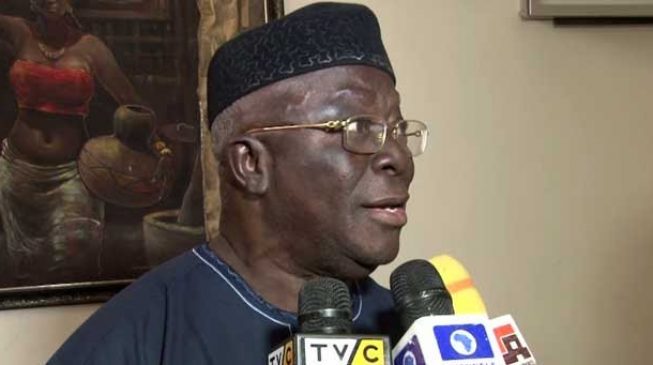 Elder statesman, Ayo Adebanjo has said that President Muhammadu Buhari has failed if he thinks he can bamboozle the Yoruba people with the June 12 declaration.

The president’s action was received with mixed feelings. While some commended him, others said he had a political undertone.

In an interview with PUNCH, Adebanjo said Buhari could not claim that he is a Democrat if he is not committed to restructuring.

“Do you think Yoruba people are that stupid? We are not that stupid. Quote me, if Buhari thinks he can bamboozle the Yoruba people with that, he has failed. Go and ask Tinubu,” the Afenifere leader said.

“Tinubu himself knows that he has burnt his boat if he continues to support Buhari on the question of restructuring. For anybody to think that he is going to do anything for us in Yorubaland now, he should restructure the country.

“And not that we will continue with a constitution imposed on us and you begin to harass us, keep all the security people in your hand, and use this (June 12 declaration) to bamboozle us and yet, you say you are a Democrat.”

Adebanjo said if Buhari was sincere with his intention, he should have made the declaration when he initially came into office.

“I’m saying if he was sincere, he would have done it when he came into office. He is not just coming into government,” he said.