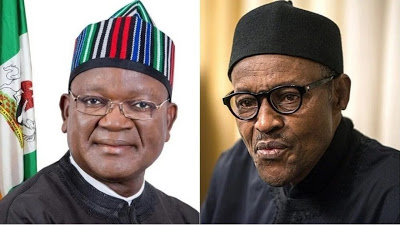 “Some peoples are afraid in this country to talk, because when they do, EFCC, ICPC and security agencies will come after them.”

Benue State Governor Samuel Ortom has bashed President Muhammadu Buhari for allegedly blackmailing Nigerian elites who have been condemning killer herdsmen that have gone rampage across the country.

Ortom, whose state Benue has been the black spot of killer herdsmen activities, accused the president repressing elites that condemn killer herders from the controversial ethnic group with both anti-graft and security operatives.

“Some peoples are afraid in this country to talk, because when they do, EFCC, ICPC and security agencies will come after them,” the Benue chief executive said at a press briefing in Makurdi Wednesday.

“They did it to me, but I went to court against them and won,” he stated.
Ortom slammed the Buhari regime for its perceived bias and conspicuous support for rampaging herdsmen, in light of its failure to rein in the excesses of the herders.

Buhari’s inaugural address after being sworn in for his first term in 2015, wherein the president had vowed to uphold the interest of every part of the country, Ortom added: “…now it will appear that you (Buhari) are for Fulani people because nothing is coming from you to give the people confidence that you are their president.”

Buhari has parroted a war against corruption since he assumed office, the drive has been marred by credible claims of partisanship in the operation of anti-graft agencies.

Several politicians of the president’s party have not been prosecuted despite credible claims of corruption against them. But members of the opposition are wantonly targeted even when they would eventually be found not guilty of corruption charges. In many cases, the most vocal voices against the administration were smeared with corruption allegations or targeted for prosecution.

Ortom suggested that many opposition politicians and business owners have decided it was more prudent to keep quiet to avoid eliciting Buhari’s wrath, which could then summarily make them an instant person of interest for law enforcement.

The president has often denied that his so-called anti-corruption war was lopsided against opposition elements.

Vicious clashes over open grazing of cattle between farmers and herdsmen have escalated in many parts of the country since 2015, with many assuming that the action of invasive herders had become emboldened by Buhari’s rise to power.

Widespread kidnapping, robberies and other violent crimes have been repeatedly linked to Fulani herders in the Southwest, leading to calls for their expulsion from the region.

Reports had recently re-emerged of a purported N100 billion truce between the Buhari government and the cattle breeders’ association, Miyetti Allah, which aimed to pacify criminal members of the group from fuelling unrest in the country.

The Presidency refuted the claims and said it was working on a solution that would be acceptable to all Nigerians.