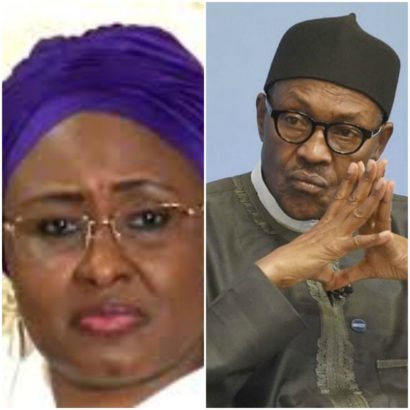 President Muhammadu Buhari has said his wife, Aisha Buhari should provide evidence on allegation that his government has been hijacked and run by cabal.

The president said her accusation was baseless describing it as “her business.”

Buhari made the demand for evidence of cabal hijacking his government in an interview with Voice of America, Hausa.

The President’s wife, Aisha Buhari, had first alleged that her husband was being controlled by a cabal during an interview with British Broadcasting Service, Hausa.

She had insisted that, “The President does not know 45 out of 50 of the people he appointed and I don’t know them either, despite being his wife of 27 years. Some people are sitting down in their homes folding their arms only for them to be called to come and head an agency or a ministerial position.”

She also threatened not to vote for her husband if things continued that way.

The President had dismissed that statement by saying that his wife belonged in the kitchen and also in the “other room.”

However, during a summit organised for women by a political group in Abuja recently, Aisha again alleged that two powerful men were holding her husband’s government hostage.

During the VOA chat, a clip of which was posted by a journalist on Twitter, the interviewer asked Buhari to formally respond to his wife’s allegations.

“That’s her business and it shows I am a true democrat by allowing everybody to have an opinion.

“I challenge those alleging to show single evidence,” the President countered.

This is not the first time the First Lady will criticize the president, some of his aides or the ruling All Progressive Congress leadership.

In 2016, she accused Buhari of neglecting those who worked for his election as the Nigerian leader.

On several occasions, the wife of the president has said a few people are calling the shot in this administration at the expense of Nigerians who brought it into power.