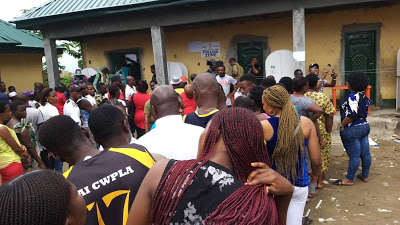 The Centre for Democratic Development (CDD) has said that security officials were complicit in the violence and disruption that characterised the Kogi State elections.

Jibrin Ibrahim, a senior fellow of the CDD, said this on Monday during a press conference in Abuja.

The Kogi State election held on Saturday had been reportedly characterised by the late arrival of electoral materials, violence, intimidation of voters and vote-buying.

Reports closely monitored on Premium Times NG revealed how armed men, including those with police escorts, raided polling units and snatched ballot boxes. The police later claimed that it was ‘fake policemen’ that were involved in the act.

The electoral commission, INEC, has also condemned cases of thuggery and violence reported during the election.

INEC regretted the incidents of violence despite the efforts of the commission and the political parties to promote peaceful elections, including several engagements with stakeholders and the signing of Peace Accords.

Newsheadline247 understands that two local observer groups, YIAGA and Situation Room, have called for the outright cancellation of the Kogi election.

Addressing journalists, Mr Ibrahim said security agencies saddled with the constitutional responsibility of maintaining the rule of law and the defence of citizens and their rights, were complicit in organising the disruption of the elections.

They, very directly, engaged in attacks at polling units for the carting away of electoral materials and for producing an outcome that is not in conformity with the wishes of voters, he said.

He also expressed concern about the direct contradiction of massive police deployment for the elections in both states.

“But on the ground, that massive deployment was not visible to eyes. Maybe they took another form because you know we are in Africa. We went through a lot of the roads leading out of Lokoja and there were no checkpoints and because the police were not there to check, those who were moving around, were armed thugs in vans, carrying weapons and moving systematically from polling units.

“This is a direct indication that there was state complicit in what happened,” he said.

He called on President Muhammadu Buhari as chairman of the police council, to set up a panel to establish why state agencies refused to play their constitutional roles in Kogi elections.

There is nothing INEC can do if armed thugs with AK-47 are allowed to move from polling units to polling units. They had to run when the thugs came because the thugs were armed and they were not, he added.

A senior Nigerian lawyer, Femi Falana, who was present, said the election report of the CDD has become a recurring decimal.

He called on the CDD and other Civil Society Organisations to ensure prosecution of those responsible for causing mayhem during the election.

“Beyond the press conference and the call of the president which may not be heeded because as of this morning, the president has congratulated the winner of Bayelsa elections and I think that of Kogi will come any moment from now…

“It is high time the CDD and other CSOs sat down to ensure that the criminal elements subverting the democratic process in Nigeria were brought to book. The government will not do it.

“My suggestion is that CDD should coordinate other stakeholders to pursue the electoral offenders in Kogi and Bayelsa so we can make a point that those who fought for the rickety democratic process will not allow it to derail,” the senior lawyer said.

When asked if the CDD calls for the cancellation of the election, Mr Ibrahim said that may not be as effective as hoped.

“We have gone beyond that point because we saw what happened in Kano. We complained…it could give us worse. So we can cancel and the same thing will repeat itself, if not worse.”