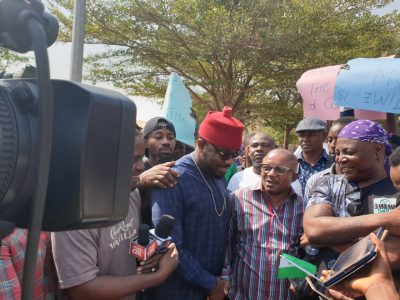 The protesters demanded that the U.S intervene in the “constitutional crisis” allegedly ignited by President Muhammadu Buhari with the removal of the Chief Justice of Nigeria (CJN) Walter Onnoghen.

The president had appointed Justice Tanko Muhammad as the acting CJN after Onnoghen’s suspension.

The protesters, jointly led by Coalition of United Political Parties (CUPP) spokesman, Imo Ugochinyere, Comrade Ariyo and Charlyboy vowed to continue sitting at the embassy until tangible response comes out of their demand.

The group also called on the Nigeria Bar Association (NBA) to announce total shut down on Monday and ban any lawyer from appearing or recognizing Muhammed.