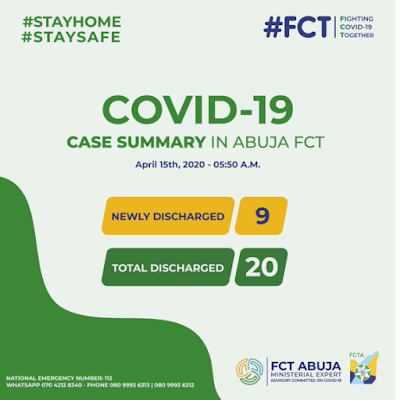 “Dear FCT residents, I am delighted to announce the discharge of additional nine (9) #COVID19 patients in the FCT.”

The federal capital territory (FCT) has discharged nine COVID-19 patients after they recovered from coronavirus disease.

The minister of the FCT, Muhammed Bello, in a series of tweets on Wednesday, said the patients have returned to their respective homes after testing negative for the disease.

This brings the total number of discharged patients in the federal capital to 20, recording second highest recovered patients behind Lagos State.

“Dear FCT residents, I am delighted to announce the discharge of additional nine (9) #COVID19 patients in the FCT after they tested negative. They have now returned to their homes,” Bello tweeted.

“I urge FCT residents to adhere to all safety measures. #StaySafe.”

The nation’s capital has so far recorded 58 cases of the disease — the second highest number of COVID-19 cases in the country.

Nigeria recorded 373 cases of the disease as of Tuesday.