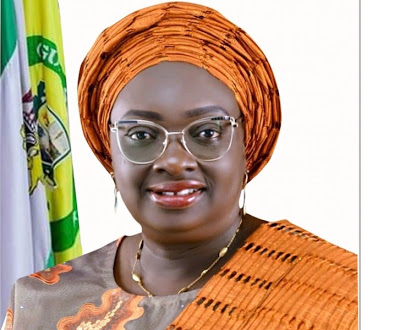 Her mission also included the flag-off of the distribution of foods and essential items to the aged and most vulnerable residents in the local government.

Salako-Oyedele was however shocked to the bone marrows with what she saw and she met an array of hoodlums and unidentified youths who had invaded the local government secretariat, demanding to have their shares of the government largess. “It was a horrible sight. These area boys were just smoking, drinking alcohol in the premises where are the food items for the vulnerable were kept. There was no social distance, without face masks and were shaking hands as if they were at a political rally.” A source at the local government secretariat informed.

The deputy governor was dumbfounded – How did these hoodlums get into the local government secretariat with the lockdown directives? How would the aged and vulnerable get the needed support with the presence of the hoodlums and area boys? Many thoughts would have raced through her mind.

We learnt that prior to the arrival of the deputy governor, the caretaker chairman of Ado-Odo/Ota local government Alhaji Wasiu Lawal had been overwhelmed and lost control. Sources say the area boys had gathered in groups, hatching plans on how the items would be looted and carted away.

They reportedly claim they also voted during the last elections that ushered in the administration of Governor Dapo Abiodun of Ogun State. They said the aged and vulnerable should be taken care of alongside the youths during the two-week lockdown. But the deputy governor’s arrival foiled their plans of looting.

As san experienced public administrator and successful engineer, the deputy governor who is an indigene of Ota felt she needed to engage the “youths” and speak with them to go home, that their CDA, CDC and religious leaders would get across to them and deliver the goodies if they fall into the categories the palliatives are meant for. “Madam spoke with them politely, explaining that everything was meant for the community. But the area boys were so unruly and began to shout in protest, that they would take all the packed food away, no matter what the deputy governor does”, the source added.

We further gathered that when all the deputy governor’s efforts to make the hoodlums see reasons and pacify them failed, the very intelligent woman had no other choice than to invite the police to restore law and order.

“The hoodlums who claimed to be indigenes were eventually dispersed by the police in a civil manner. Thank God the deputy governor came at the nick of time, all the efforts of the state government to alleviate the effects of the lockdown on the vulnerable in Ado-Odo/Ota would have been in vain. What I know is that the items would be distributed today through the committee made up of CDA Chairmen, CDC Chairmen, Imams and Christian leaders.