HomeHealthCOVID-19 virus: We have moved coronavirus patient to a renovated facility –...
FeaturedHealth

COVID-19 virus: We have moved coronavirus patient to a renovated facility – Lagos Govt. 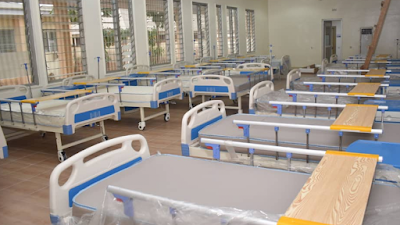 The Lagos State commissioner of health, Akin Abayomi, has said the Italian who tested positive to coronavirus, has been moved to a renovated facility.

The patient quarantined at the Infectious Disease Hospital in Yaba, Lagos, had reportedly complained of excessive heat and mosquitoes and subsequently made an attempt to escape from the facility on Friday.

The health commissioner, while appearing on a show on Arise Television on Saturday, admitted that the patient had complained,  but he swiftly added that he is now comfortable in his new ward.

“I saw him at about 6pm yesterday. He was explaining his condition and we were taking some new data from him,” he said.

“He’s in an isolation room all by himself and we had moved him into a particular room because we were doing a general overhaul of the whole facility because we want to be ready.

“There were some discomforts in terms of heat, but about 9pm we moved him over to the renovated facility which has lots of air conditioners, fans and it’s a 28 bed brand new facility, and he’s there on his own in the whole ward and as of 6am this morning I’m told he’s comfortable.”

He said the Lagos government has been building capacity since the Ebola outbreak of 2014.

The Italian citizen entered Nigeria on the February 25 from Milan, Italy for a brief business visit. About 28 people believed to have had contact with him have been quarantined.