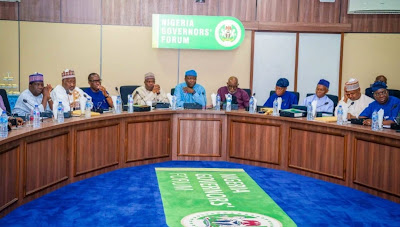 The Nigeria Governors’ Forum (NGF) has rejected the travel ban placed on Nigeria by Canada and UK over the Omicron variant, describing it as “precipitate, unfair and discriminatory.”

The governors stated this in a statement in Abuja by its chairman, Governor Kayode Fayemi of Ekiti.

“Only three cases of the Omicron variant of the coronavirus were detected in Nigeria less than a week ago, precisely on December 1. Canada and the United Kingdom have hastily included Nigeria among the Omicron-present countries which must stay away from their shores, an action viewed by the NGF as precipitate, unfair and discriminatory,” the governors’ statement noted.

The NGF argued that “there is also no evidence that harsh, blanket travel bans will protect the countries that impose them,” describing the ban as ironical when the WHO advised that “rational proportional risk reduction measures” be taken by countries.

The governors listed the measures given by the WHO to include screening passengers before departure and arrival in a country or enforcing a quarantine period.

“The NGF, therefore, urges the WHO to intervene in this matter by setting uniform standards that are acceptable to all for banning countries across the globe. As we know, vaccine hesitancy is quite high and for many reasons, including disruptive announcements like this, which could exacerbate distrust of the vaccine and heighten hesitancy,” the governors further stated.

They called on countries to be guided by science and fairness in setting the criteria for updating their red list. (NAN)

OPINION: DOWEN COLLEGE: THIS MAY BE MY LAST POST ABOUT SYLVESTER’S DEATH [OPINION]