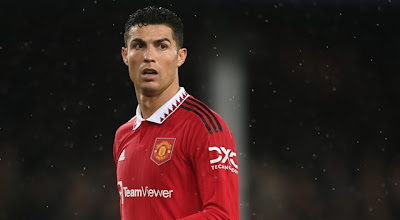 Cristiano Ronaldo has left Manchester United with immediate effect, the club has confirmed, according to Manchester Evening News.

A statement released on Tuesday evening announced the club had reached a mutual agreement with the player to terminate his contract.

“The club thanks him for his immense contribution across two spells at Old Trafford, scoring 145 goals in 346 appearances, and wishes him and his family well for the future.

“Everyone at Manchester United remains focused on continuing the team’s progress under Erik ten Hag and working together to deliver success on the pitch.”

Ronaldo also issued a statement following the announcement – saying he still loved the club and the fans.

He said: “Following conversations with Manchester United we have mutually agreed to end our contract early. I love Manchester United and I love the fans, that will never ever change. However, it feels like the right time for me to seek a new challenge.

“I wish the team every success for the remainder of the season and for the future.”

It comes a week after Ronaldo unsettled the club in an outspoken TV interview with Piers Morgan.

Meanwhile, Manchester United could finally be sold by its American owners after a 17-year reign dominated by fan protests and declining on-pitch performance.

The Glazer family is preparing to formally announce its intention to examine potential sources of outside investment that could include a full-blown auction of arguably the world’s most famous football club, according to a report by Sky News.

Sources said on Tuesday investment bankers were being instructed by Manchester United’s owners to advise on the process, which is likely to include a full or partial sale, or strategic partnership with third parties.

A statement confirming their intentions could come imminently, one of them said.

The announcement of a review of financial options that could include a sale process would signal an end to years of speculation over whether the Glazers might be persuaded to offload a club which for the past decade has experienced an almost-unmitigated footballing decline.

United has not won the Premier League title since 2013, and has sacked a succession of managers in the aftermath of the retirement of Sir Alex Ferguson.